I’m annoyed that the comments for the post on The Wild Hunt are closed only two days after its publication.  I had stuff to say.  I’ve been to many a Pcon, and have been there in various capacities, both inside organizing as a volunteer and as a presenter.  Thus, I’ll share what I had wanted to say, and more, on this blog.

The first year, in downtown San Jose, not near the airport, I helped run the Green Room and had a role in Reclaiming’s Brigit ritual there.

Over the years, I’ve had panels that have had people sitting in the aisles and spilling out the doorway.  (Pagan Clergy, Death & Dying, et al.)  I’ve been a functionary in rituals others created and presented some of my own. (big Brigit ritual written by Laurel Olson Mendez, 19 priestesses; “Witchual: A Spell”; Oracles from the LivingTarot – really screwed up on that one; et al.)

The year 2000 CE saw the first performance of three of Goddesses Alive! using Lauren Raine’s gorgeous goddess masks, in celebration of the late Abby Willowroot’s Goddess 2000 project, at the old Jack Tar Hotel in San Francisco.  This ritual, in a much more polished form, was performed again that December at New College of California (RIP), and had its final performance at the Parliament of the World’s Religions in Salt Lake City in 2015 — one of the great honors of my life.

One year when it was at the Oakland Convention Center I headed the volunteers.  It was not a good experience for me, sorry to say, since my efforts were stymied by arbitrary interference, to the point where I would never again volunteer there.

Cherry Hill Seminary presented symposia the day before the Con began three or four years, thanks to PantheaCon's Glenn Turner’s offering us rooms in which to hold them.  One year we even managed a CHS hospitality suite shared with the House of Danu. 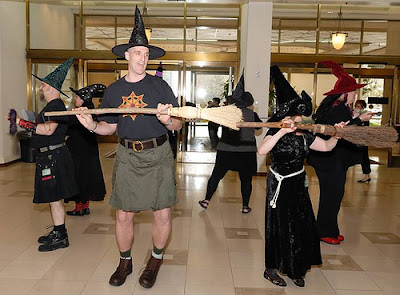 My “Growing Pagan Elders” study was rejected three years in a row, for reasons unknown.  I had originally conducted this study for presentation at the Claremont Conference on Current Pagan Studies, and I’ve been paid to present it elsewhere.  It was a lot of work and was about something we as Pagans were facing as our movement matured.  I got over 700 responses on my open-ended survey on Survey Monkey.  By “open-ended” I mean I left lots of space for narrative,

Finally, after three years, I was given the 9 am Monday time slot, when everyone has left or is preparing to do so.  So who was sitting in my very unsexy presentation that year?  Margot Adler, Selena Fox, Ivo Dominguez, Michael Smith, Amber and Azrael K, and other leaders, so I guess it was interesting enough for them.  Hmm, do I sound bitter about that?

After that I quit submitting proposals, except for sitting on a panel now and then, and just attended so I could visit old, seldom seen friends, attend a ritual or presentation as they interested me and if they were led by a friend – in which case I knew they’d be good.

Some years I was away at another Pagan gathering the same weekend.  Last year I didn’t go because of the furor and dysfunction.

This year I was given the 7 pm Friday evening time slot, a time when many had not yet arrived, for another unsexy talk on creating Pagan infrastructure called “Have Paganisms Gone Mainstream? The Spiritual Meets the Secular.”  To my surprise, we had a full house, a double room that was one full room and about 1/3 of the spill-out room, maybe 50 people.  Of course, I forgot to ask someone to take photos and forgot to pass around a sign-up sheet.  Discussion was so lively that Con staff had to throw us out of the room for the next talk, and I got lots and lots of positive feedback throughout the rest of the Con.  Very satisfying.

I do applaud and appreciate Glenn for creating these opportunities to create Pagan culture.  'Back in the day' that creation and cross-fertilization was done in the context of outdoor camping festivals, especially in the South and Midwest.  My theory about why there were so few on the West Coast was that we are already liberal and accepting and don’t need to sneak off for private meetings where we weren’t jeopardized by the threat of outing.  PantheaCon has played a major role in the cross fertilization and evolution of contemporary American Pagan culture.

Posted by Broomstick Chronicles at 6:39 PM

Thanks for these reminiscences.

I suspect that the reason we haven't had many big Pagan outdoor festivals in the West is because most of the Pagan population is in California, and California is in constant fire danger during the summer. It is very hard to find a site for a gathering--I know, I've tried.

I would also bet that simply renting a space for a festival is a much bigger obstacle economically in California than elsewhere in the country. Maybe you can find a cheap space to rent near the border with Oregon, but most people aren't going to drive that far.

And if a workshop is interesting to people they will show up to it anytime of day at PantheaCon. 9:00 AM is not the not death sentence people think it is.

The Wild Hunt has long had a policy of shutting down comments after two days. They get a lot of traffic I'm sure it makes their life much easier not to have to monitor every post.

Thanks for the memories, Macha. I hven't been able to attend PantheaCon in many years - I can't deal with that many people. I've been tempted a few times, even made reservations a couple, but when my support neetwork folded, I had to bail as well.

All in all, Glenn managed a good thing, but all things come to an end, and judging from the last few yearss, it looks like it was time. Good luck to whtever takes its place, and best wishes to Glenn as she moves to the next project for her.

Macha,
I was glad to learn the Besom Brigade's chant and march/dance that one Merry Meet (2009?). The besom I made is still a very magical tool in my life and practice.... And, I was so glad to attend your Merry Meet Leadership talk on Death as Compassionate Release that other Merry Meet. I'll never forget it.
As much as I am a priestess in my coven and a servant leader in my community (I'm a teacher Coach in a Public school setting), I am still very shy. So, although I have not come up to you in San Jose, look you in the eye, and say 'Thank You,' out loud, please know that your presence at PCon has meant a lot to me. Seeing you, hearing you, and knowing of your presence has made a positive difference to me.
With Love,
~Zephyre

Macha, thanks for this very informative post! I have probably been to four or five PantheaCons and enjoyed them all for different reasons. One year I presented. Another year, I was a coordinator for 8 sign language interpreters who provided services to deaf attendees. And other years, I’ve just lurked. But it was always fun to hang out with you at that restaurant in the DoubleTree, whose food very steadily increased from barely edible to somewhat more edible (their demographic much be normally a very low bar - most Americans can’t handle flavors that are “too frisky.”)

Maks said...
This comment has been removed by the author.
3:43 AM