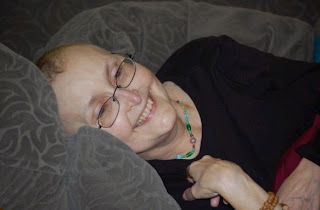 Family and friends are organizing a memorial to take place on Sunday, February 3, 2008, from 2:00–4:30 p.m. at the San Francisco Women’s Building, 18th & Valencia Sts., site of some of Susan’s most moving singing. Anyone who would like to bring flowers, photos, mementos or other altar objects is welcome to do so. Bring potluck refreshments to share and unbreakable and reusable or recyclable plates, cups and utensils (no kitchen facilities). There will be an open mike for anyone who would like to speak, sing, or play music. (Donations to cover costs will be requested.)
Posted by Broomstick Chronicles at 4:56 PM 1 comment:

A Great Day for Voting & Skating

Well, my man Barack Obama -- yep, I'm an Obama Mama -- took South Carolina handily, while my colleagues in Marin County staffed the phone banks. This is the most exciting election, presidential or otherwise, in my voting life.

I'm proud to say I've never missed voting in an election at any level in all since first registering, in 1964 when you had to be 21 to vote. Once when I was working at Harvey's Casino in South Lake Tahoe for a few months, I drove all the way down to the Fillmore District of San Francisco where I was still registered. I worked on Congresswoman Shirley Chisholm's campaign in 1972, then supported George McGovern after the primaries, but didn't canvass for him like I did for Chisholm. I think that year was the end of grass-roots presidential campaigns. Until now, that is.

Barack's autobiography, Dreams from My Father, reveals him to be a reflective man, one who can write with as much eloquence as anyone. Now I'm reading The Audacity of Hope -- I love that phrase! -- and I continue to be deeply impressed by the man. I'm also reassured that he won't get too far off center because he has his wife Michelle, a strong and uppity woman, to keep him in line.

* * * * *
I'd forgotten about the fact that the U.S. Figure Skating Championship was taking place tonight in St. Paul and was being broadcast on prime time Saturday night. My friends know that I'm wild about figure skating, have been since childhood, when I painted a series of cocktail glasses from photos of skaters I saw at the Shipstads & Johnson Ice Follies.

Tonight was pairs and women's; I should say girls because I think the oldest contestant was 20, the youngest 14, with several being too young to be ineligible for international competition due to their age. It was one of those special nights when every skater gave her and his best. In pairs, both Meryl Davis & Charlie White, whom I'd never seen before, and Tanith Belbin & Ben Agosto were splendid.

In the women's, I'd been favoring young Caroline Zhang, popularizer of the "pearl spin." She skated perfectly, enough to come from seventh in the short program to first in the free skate. Then Rachael Flatt and Ashley Wagner took our spectators' breath away (even mine on my couch instead of in the arena), only to have the final skater, Mirai Nagasu, take the gold. I'd be happy to see any of those four on the podium. This was skating at its breathtaking best.

Tomorrow night is the men's, where I get to see one of my all-time favorite skaters, Johnny Weir.

Posted by Broomstick Chronicles at 1:01 AM 4 comments: 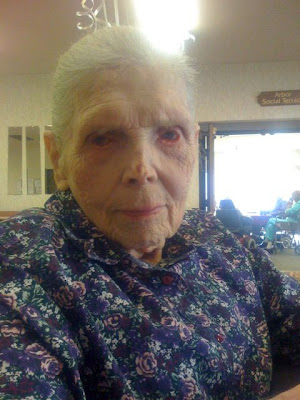 Life is flying by too fast for me to take a breath and blog. Last Saturday afternoon Corby and I visited my mother to celebrate her 97th birthday. My sister Catherine took this photo earlier in the day. She's not happy. We are caught in the middle of the nightmare of US health care and insurance limitations. We don't know what more we can do to make her life more pleasant. Below is her photo at her 90th birthday party. 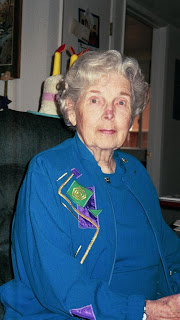 More about Susan soon, but for now I'm testing to see if this photo works. Well, it does, but it's only teensy. If I try to enlarge it, it only gets fuzzy. I copped it from SnapFish because Jan Dance, the photographer, is not at her computer in Portland, where the photo lives, but instead is here in the Bay Area dealing with Susan's death. It was taken just a few days before Susan passed. She's reclining on the couch in Vibra's living room. You can see that her hair is gone and her skin has that translucent appearance I've often observed in those who are close to the other side. More importantly, you can see her shining spirit.

It's only two weeks into 2008 and already I've lost two friends to death. One died in late December, but funeral was in January. That was Ted Looyen, creator of LooyenWork. There's a story or two about his funeral.

The other, just this past Saturday, was Susan North Green Wolf Oak Falkenrath. Susan changed her magical surname from time to time, which is why you see so many names. For many of the early years of Reclaiming's Spiral Dance Samhain ritual, Susan opened the ritual with her song "Spirits." In a darkened room lit only with a cauldron fire, Susan stood in front of the flames, as a woman consigned to the stake, singing of the spirits to her daughter. You can imagine how powerful that was. Holly Tannen recorded this song on one of her albums (possibly only on LP and not on CD), and it appears on "The Best of Pagan Song" album produced by Anne Hill of Serpentine Music. Some years later, after treatment for inflammatory breast cancer and with a bald head, Susan again opened the Spiral Dance with this song. Among those of us who know and love Susan, there wasn't a dry eye. Now that she's gone, from a recurrence of cancer, we cry again, for loss this time instead of for recovery.

Meanwhile, my mother turns 97 on Saturday, although she doesn't really know that. Corby and I will attempt some sort of celebration with her.

And it's January, time to catch up on accounting for my income and expenses for 2007.
Posted by Broomstick Chronicles at 3:56 PM 1 comment: