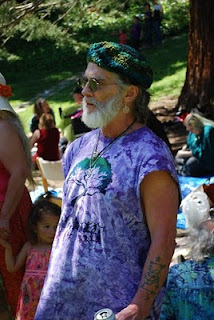 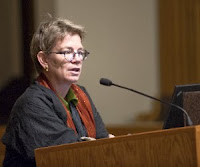 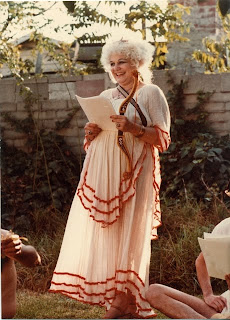 * Forgive me, Tony, if this term is inaccurate.
Posted by Broomstick Chronicles at 2:02 AM 2 comments:

Today my local interfaith group celebrated National Day of Prayer in a more ideal form than many have come to expect. By more ideal, I mean in a truly diverse and tolerant way, respecting all religions. With over 200 in attendance, many for the first time, we had 21 tables, each with a table captain to facilitate discussion. I was one such table captain. The question for discussion was in what ways you use prayer in your life. Due to the size of the crowd and the noise of people getting their breakfasts from the buffet tables, our conversations were limited to those few sitting on either side of us instead of involving all seated at a table.

After a welcoming by our director, the Rev. Carol Hovis, and an opening prayer, the Marin Interfaith Singers sang "Dona Nobis Pacem," a song I really love. 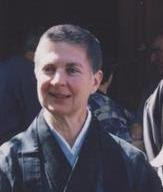 The Rev. Linda Ruth Cutts, a Zen Buddhist priest from Green Gulch Farm Zen Center, said that although prayer is not a term used in Buddhism, "everything we do is prayer." She said Zen practitioners do have words/language similar to what others might consider to be prayer, such as the words they say when offering gratitude for a meal and all the life forms, sunlight, soil, cultivation, preparation, and such that went into the meal. She said that monasteries and in some private homes altars are erected outside the restrooms for the users to take a moment to acknowledge their interdependence on all things. She differentiated between seated meditation and active meditation (out in the world), followed by a brief seated meditation for all of us. 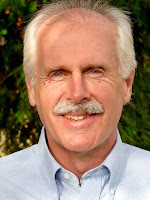 David Stevens, Christian Science practitioner and teacher, although he is an accomplished speaker, articulated his Christianity with a degree of certainty that I found less appealing. His prayers were understandably limited to appeals to a single god, with the assumption that all his listeners shared this perspective. He reminded us that prayer is unconfined, it's portable, and it's natural. He claims that prayer "replaces fear with confidence" and "confusion with clarity." I agree it can.

He concluded with a reading of the Christian Lord's Prayer. He had a colleague reach each line in the familiar language from the King James Bible, followed by his reading the interpretation of the same line as found in the writings of Mary Baker Eddy in Science and Health with Key to the Scriptures. Personally, I did not resonate with these words.

The final speaker was Sister Mary Neil of the Dominican Sisters. Sister Mary holds a Ph.D. and taught religious studies and theology at the University of San Francisco for many years. Now retired, she is a very young-looking 77 years old. (That's Sister Mary on the left in the photo. The woman in the center is my friend Sister Colleen McDermott, a member of MIC's Board of Directors.)

She said that prayer isn't something you really think about very much; rather, when you are in crisis, you cry help! Prayer is "remembering who I am." She claims prayer is difficult because it demands intimacy and it demands truth.

She says she feels a strong pull towards Buddhism, particularly for its development of meditative techniques. She explained a chakra meditation she does in which she applies scriptural words and phrases to each chakra as she meditates upon it. For instance, at the throat chakra she speaks of the hunger and thirst for God, and at the crown chakra, she says Jesus' final words, "into thy hands I commit my spirit."

I think it's really interesting to recall that it was due to the participation of the Hindu Swami Vivekananda at the first Parliament of the World's Religions in 1893 at the Chicago World's Fair that opened the world of Eastern religion to the West, and here we are today, more than a century later, listening to a Roman Catholic nun speak of applying the chakra system to her Christian meditation and prayer.

Before I even got this, this article about the event appeared in the Contra Costa County Times. (Contra Costa is across the SF Bay from Marin County.)
Posted by Broomstick Chronicles at 2:08 PM 2 comments: