About a year ago I happened to run into a friend when I attended a panel sponsored by Compassion in Dying (now Compassion & Choices). A primary speaker was Barbara Coombs Lee, Chief Petitioner for Oregon's Death with Dignity Act and a woman who has frequently testified before the U.S. Congress on end-of-life issues. I'd met this friend, Susan Stern, in some of the first circles to which I was invited back in the 1970s; we hadn't seen each other in years. When I inquired what brought her to this event, she told me of her father's death on July 5th of that year, just a few months earlier, and how he'd left a video for herself and her sister. She was there as part of her research for the film she was making with this material. The result of Bob Stern's gift to his daughters is The Self-Made Man. So even though I was unable to attend the film's debut screening, I was delighted to know that it had been completed. Not only done, but done so well it's up for an Emmy.

I finally had an opportunity to watch this film last night on our local PBS station, KQED. Susan has built the story the around her father's amazingly pragmatic decision to cut his losses and spare his family and himself the aftermath of cardiac surgery, and more perilously, advanced prostate cancer, by taking his own life. But, just as Susan had told me at our fortuitous meeting, before he did this, and as part of his process he discussed it with his wife Adele and son Mike, and, left a videotape for his daughters, Laura and Susan. Featuring interviews with family, old friends and eventually grandchildren, voiceover ruminations by the filmmaker, and a synopsis of Bob Stern's self-made, and financially bountiful, life, The Self-Made Man offers a personal insights into the timely issue of 'conscious self-deliverance.' Filmmaker Susan Stern , her family, and especially her dad, have given us a beautiful, thought-provoking and compassionate film.

Bob is all the more remarkable for having been a pioneer in the field of solar power in California's Central Valley. Thus, his life had great meaning on many scores, meanings that live beyond his mortality.

As an advocate for choice in matters of living and dying, I cannot recommend this film more highly. Here is a schedule of airings on PBS' Point of View.

Susan is also the producer of Barbie Nation: An Authorized Tour.
Posted by Broomstick Chronicles at 5:10 PM 2 comments: 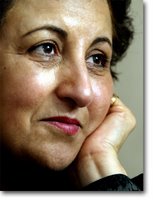 Last night my friend and colleague Malendia Maccree and I went to Angelico Hall at Dominican University here in my town to hear a talk by Shirin Ebadi. She spoke to a full house of 700 on the topic of "Human Rights, Islam and the West."

I was delighted to see that she was introduced, in Persian, by my colleague in the Marin Interfaith Council and on the Board of Directors of the Foundation for the Advancement of Women in Religion (NAWR), Dr. Nahid Angha, founder of the Sufi Women Organization. The enthusiastic crowd greeted Ms. Ebadi with a standing ovation when she first stepped onto the stage, once during her talk, and at the conclusion, with many bursts of applause throughout the evening.

During the Q&A afterwards, one question was what she'd tell George Bush about Iran if she were to meet with him. She answered, ""I would suggest to him that he not be president anymore." Full report in Sunday's edition of the Marin Independent Journal.

Afterwards, Malendia and I chatted in the lobby with a few of the folks I've met through MIC, before buying her book, Iran Awakening: A Memoir of Revolution and Hope, which Ms. Ebadi autographed.

Only Sunday morning did I realize I had blown another interfaith event I'd intended to experience. Tibetan monk Losang Samten created a sand mandala of the 2,500-year-old Wheel of Life design at the Marin Center Exhibition Hall. On Saturday he swept it away and disbursed it in the lagoon. I'm really disappointed I missed it. The only other one I've seen was in the late '90s when my friend Pitch and I went to see the Tibet exhibit at the old De Young Museum in Golden Gate Park.
Posted by Broomstick Chronicles at 2:46 AM No comments:

About six months ago I got the idea that if we, meaning Cherry Hill Seminary where I chair the Public Ministry Program, were using educational software to create cyber classrooms, we might as well expand our virtual campus with the addition of a lecture hall. I'm delighted to say that our initial foray was a great success.

I think tonight’s lecture started the series off with a bang. Beginning with Mary Windrider Bowerman’s gracious introduction, followed by Chas Clifton's fascinating presentation, and ending with provocative Q&A, it went off without a hitch. Chas had posted some excellent resources which he referenced in his talk. We had no delay with Chas dial-up connection, nor did anyone get bumped from the chat even once.

I urge you, dear reader, to consider attending next month’s lecture by Patricia Monaghan, one of the foremost goddess scholars in the world. Drawing from her book, The Red-Haired Girl from the Bog, Patricia’s topic is "The Celtic Path: Spiritual Geography and the Irish Goddess."

My thanks to all who participated, especially Chas, for diving into these mysterious waters and playing together. May word of this offering spread around Pagandom and may we be joined by many others on October 8th.
Posted by Broomstick Chronicles at 2:03 AM 1 comment:

Voices from the Other Side

It's obvious that the nights are lengthening and Autumn is approaching because I seem to be drawn to reflecting on old friends who've crossed over. Not necessarily friends who've left recently, either. Raven died in 1986 and came to mind -- well, he frequently comes to mind, mine and the minds of many others -- because his and our Shadowfax was dying. Ann Turner died in the '80s and Judy Foster in 2000. When Corby and I visited Ireland in 2004, our friend, linguist Jim Duran (Séamas Ó Direáin), now living in Galway, told us of the death of my old friend Padraigin McGillicuddy.

I have no photo of Padraigin. I can find nothing on the Web except references to her old radio show, "A Terrible Beauty," on KPFA. What I do have is fond memories.

Padraigin used to live in a huge old Victorian in Oakland, said to have been the childhood home of Gertrude Stein. She who is said to have said of Oakland, "There is no there there." I can't say what Oakland was like in the late 19th century when Gertrude lived there, but I find plenty there now.

Padraigin had a son named Sean Peter who died tragically some years ago, by his own hand. Our mutual friend, harper Sharon Devlin Folsom tells me that Padraigin's daughter, Kerry McGillicuddy, is an athlete, perhaps a phys ed teacher, a personal trainer or a coach. A Google search netted me the information that she used to be the recreation director of LYRIC and that she recently has been a women's basketball referee.

I'm mentioning all this detail because two people have contacted me about Padraigin. One has some family photos she'd like to give to Kerry. The other would like permission to reprint material from Padraigin's booklet, The Patriarch Revealed: A Feminist View of St. Patrick (1981). And speaking of the departed, another old Institute of Celtic Studies friend, Ken Ruffner, did the artwork on the cover and inside the book.

In the meantime, I've tried contacting another contributor to the book, Bob Callahan of Before Columbus Foundation and the New College Irish Studies Program to seek permission and to see if he can help me locate Kerry. If you have any information about Padraigin or Kerry, please contact me.
Posted by Broomstick Chronicles at 9:12 PM 2 comments: