© Ron Greene*
Lest we get bogged down in my personal disappointments with Reclaiming, I remind myself and readers that there are bigger issues in our worlds.

In late July the Marin Interfaith Street Chaplaincy memorializes the homeless of our county with a gathering, march, and brief program.  If I am not away from home, I participate.  This year was a bit different, in that there was much less diversity among the interfaith participants.  After we are called together with drumming, often a Buddhist will light incense and offer a prayer to bless the endeavor.  There was no Buddhist there this year, although there are several Buddhist congregations and at least two prominent Buddhist retreats in the county.  Nor were there any representatives from any of the local Jewish synagogues, as there have been in the past.  Nor was there a contingent of Dominican Sisters like I'm used to seeing.  I'm guessing this is because the date conflicted with other important matters these folks needed to attend rather than being due to disinterest.  In any case, I was surprised that the only speakers from the religious community were about four Protestant ministers, including my colleague on the Justice Advocacy Team at Marin Interfaith Council, the Rev. Liza Klein of San Rafael First United Methodist Church; one priest from St. Raphael's; and one Pagan, yours truly.

We gathered in the plaza in front of St. Raphael's, near where a tree was planted by this same group about ten years ago.  I took the two photos below a few years ago; the tree has grown larger now. 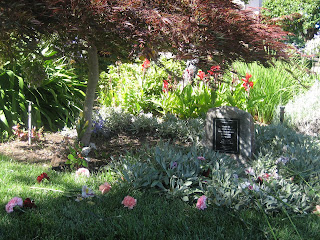 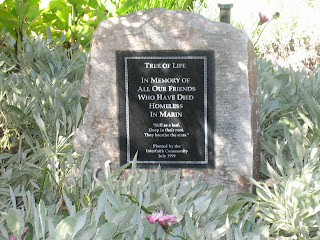 My contribution was a prayer to the Mother of Justice, followed by singing of a beautiful round called "When We Are Gone," written by Anne Hill and Starhawk and published in The Pagan Book of Living and Dying (as is the prayer).  We have done this enough times now for some of the people to know the song, so the singing was fuller, richer, and sweeter than it's been in past years.

Sometimes people ask why I do this.  The answers are many, but the main one is that there are Pagans among our nation's homeless, and they have told me how much they appreciate seeing a Pagan face among the speakers.  They have also said they're glad to see acknowledgement of goddess worship.


* * * * *
* Ron Greene has several entries on the homeless in Marin, accompanied by moving photos, on his blog site.  In this photo, I am in the left foreground wearing purple and a big pentacle.
Posted by Broomstick Chronicles at 3:37 PM No comments: