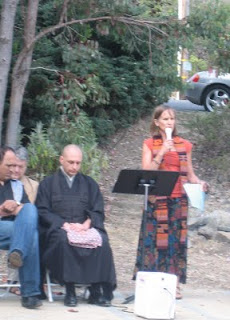 Like so many millions of Americans across the country, we here in Marin County stopped to remember the events of 9/11/2001. There were about a dozen events listed in the local newspaper commemorating that day, so I wasn't expecting too many people to come to this one offered by Marin Interfaith Council, but come they did, about 80 in all. In speaking with others who were there, I learned that some were not religious people, but simply wanted to come together in community for this occasion. They didn't want preaching, of which we had none (and if we had, I likely would not have participated).

We gathered in a circle around Community Congregational Church of Tiburon's new labyrinth. One arc of the circle was shaded by a small grove of redwoods, and another opened onto a vast view of the Golden Gate and the Golden Gate Bridge. A central altar table held a staff (gift to the church from the woman who consulted on building the labyrinth), a blue glass novena candle, a Tibetan singing bowl, and a small statue of Lady Liberty. I placed the last two items there. Lady Liberty's torch held a small candle. There was a light breeze blowing, so I didn't expect to be able to keep a candle lit. Those who saw me about to do so told me not to bother. Still, it was important to light it, so I did. It burned for a few seconds, maybe a minute, and blew out.

The Marin interfaith singers opened the gathering with "Dona Nobis Pacem," a lovely song that most, if not all, religions seem comfortable with. I know I am. 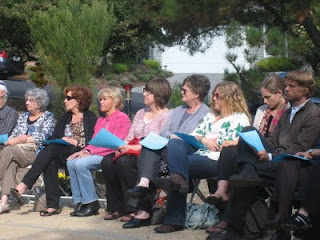 We were welcomed by the Rev. Carol Hovis, Executive Director of MIC, and the Rev. Curran Reichert, pastor of the host facility. I was encouraged to hear Carol speak of the religious dimension of the 9/11 attacks and of the fact that all religions have their dark sides.

The Rev. Jeremy Levie of Green Gulch Farm and Zen Center, read from the Buddhist tradition. Rabbi Henry Shreibman, a reconstructionist Jew, recited in Hebrew from the book of Lamentations, then spoke the words in English. Then MIC intern Abby Fuller rang a bell signaling silent meditation. 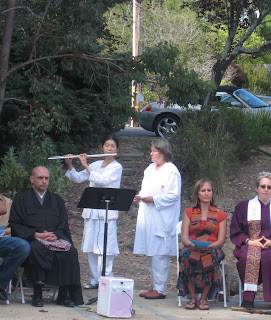 Following another period of silence, in honor of Lady Liberty, I read "The New Colossus," by Emma Lazarus, written in 1883 and inscribed at the base of the Statue of Liberty in New York City Harbor.*

As I walked back to my seat on the other side of the labyrinth, I stopped to relight Lady Liberty's torch. It lit, and it stayed lit. 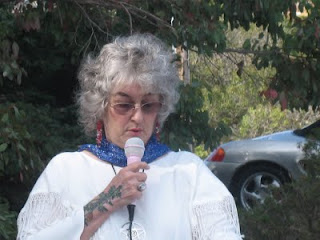 We closed with a group chant that was written by a member of the EarthSpirit Community in Boston as her immediate response to the 9/11 attacks. As I led the chant, I extended my hands to grasp those of the people on either side of me, until the we all created one circle. 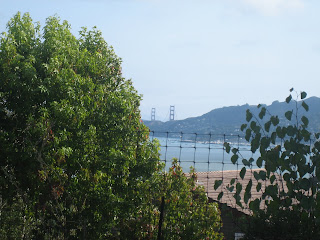 The magic of the day was that for the duration of the service, Lady Liberty's flame stayed lit. It would flicker and seem to be gone, and then it would leap to life again. Corby and I were watching it intently. I noticed that Carol Hovis across the circle was also watching it. As it turned out, almost everyone was watching that sacred flame, as many of them commented to me afterward. I told them it was magic, which indeed it was. We Pagan priestesses are good at doing magic.

Corby and I, and others, I'm certain, found each different reading offered something comforting, wise, and inspirational to be gleaned.


* I was pleased to learn that my colleague at CHS, Holli Emore, read the same piece at an Interfaith Gathering for Peace in which she participated in Charleston, SC.
Posted by Broomstick Chronicles at 5:15 PM 3 comments:

See guest post at California Correctional Crisis blog.
Posted by Broomstick Chronicles at 2:59 AM No comments: