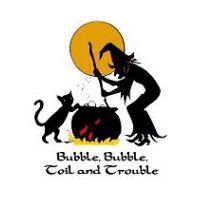 I think the stirrer of the cauldron performs an important, even vital, role.  Someone, preferably more than one, in every community should step up to the cauldron and stir it now and then, especially when the fire beneath the cauldron gets too hot.

Cauldron-stirring is different from shit-disturbing.  The latter aerates stinky stuff and releases noxious odors.  No one wants that.  The former, however, is a necessary part of the brewing process.  Ask any cook or brewer how things turn out if neglected and just left to simmer (or even boil) unstirred.  I am neither cook nor brewer, but I don't need to be to see that this is true.

Without stirring, stuff gets stuck on the bottom of the pot, where it accumulates, blackens, and becomes solid and resistant to being cleaned up.  Not stirring the cauldron leaves this icky stuff that needs to be chipped out with a hard, sharp tool in order to have a clean cauldron from other brews.

At the second Dandelion Gathering1 in Western Massachusetts, a crew prepared a brew for bio-remediation of something on the property, if I recall correctly.  Or perhaps it was to be taken elsewhere to be used.  In any case, the brew needed regular stirring.  I loved stepping up to it and taking some turns at swirling it into something rich and different from its individual components.  I found it a wonderful addition to some of the ritual done there.  It was there in the big meeting room for most of the gathering.

That's what I see happening now.  I am a chief stirrer.  Some others are noticing the changes in aroma coming from the cauldron.  Others are stepping up to take a turn at stirring. Others are angry that anything is being disturbed.  It's been my hope that this stirring might loosen the gunk on the bottom of the cauldron.  Because, after all, if the brew isn't "healthy" and transforming the contents of the cauldron into something nourishing, then what's the point of making it?


1.  Biennial all-Reclaiming gathering, instituted in Texas in 2004.  Although I am no longer affiliated with Reclaiming as any kind of entity (a slippery one to pin down), I have been for more than 30 years and I did attend all Dandelion Gatherings.  I will not be attending any more of them.
Posted by Broomstick Chronicles at 6:33 PM

How thought-provoking! I must ponder the difference between the cauldron stirring and the shit disturbing and what I, myself, have done in the past. Thank you for this opportunity for growth!
Susan

A great description of stirring, Macha. As our friend, Steven Posch, has said for years, "If you don't stir the cauldron, the stew is gonna burn."

As a huge fan of Wm Shakespeare, I must comment on the caption of the wonderful cartoon image accompanying your post. The quote from the Weird Sisters in "Macbeth" is "*Double, double*, toil and trouble...", not "Bubble, bubble..." as many folks think.

Macbeth: "You secret, black, and midnight hags, what is't you do?"

Witches: "A deed without a name."

Yes, Sparky, I knew it was "Double, double," but I found this little image the way you see it and decided this blog needed a visual, so I used it anyway.

"A deed without a name," indeed!

"Stirring the Cauldron" can be applied to so many things. Don't just sit and wait for something to happen. Get out there and give a helping hand.