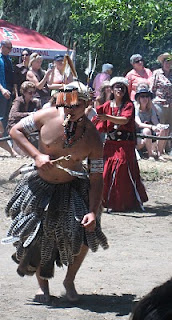 Earlier this month, Corby and I attended the 30th Annual Big Time, a midsummer festival of the Coast Miwok and Pomo people of California. The College of Marin, in partnership with the Miwok Archaeological Preserve of Marin (MAPOM) and the Point Reyes National Seashore, offered a special event in conjunction with Big Time.

The first speaker, Betty Goerke, author of Chief Marin: Leader, Reble, and Legend, a biography of the Native (1781-1839) for whom the county was named -- his name was Huicmuse, he was christened at Mission Dolores as Marino, shortened to Marin -- gave a brief history of the Marin's indigenous Coast Miwok people who were living here when English ship captain Francis Drake (prior to being knighted) and his crew, sailing on the Golden Hind, landed at what is now called Drake's Beach in 1579. They were the first Europeans to encounter Coast Miwoks.

She showed the former coastline of what is now California, which extended maybe another 20 miles into the Pacific; this was before the formation of San Francisco Bay. She claims there is evidence of Miwok villages under the sea where the coastline had been, dating back 20,000 years.

She also showed illustrations of Coast Miwoks, in their tule boats, paddling to meet European ships entering the Bay. 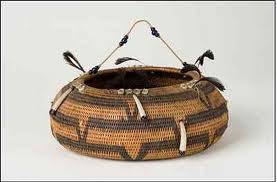 Ralph Shanks, an authority on basketry, told us that many of the most exquisite examples of regional basketry are in the collections of European museums -- in Germany, in London, and at the Hermitage in Russia. Russian traders settled along the Russian River and the towns of Fort Ross and Sebastopol in Sonoma County (one county north of Marin) around 1812. Evidently those traders recognized the value and uniqueness of this indigenous art form. Dr. Shanks and his wife, Lisa Woo Shanks, have written books about California Indian basketry.

He showed photos of many kinds of baskets, some of which were decorated with shells and feathers. The red feathers on the heads of the acorn woodpecker were highly prized, both for basketry and for personal adornment.

In addition to their everyday uses, for cooking, gathering and other domestic applications, baskets had ceremonial uses. They held water, but were not suspended over fire or they'd burn. Instead, hot rocks were placed into the acorn mush or whatever they were cooking in the basket, and that cooked the contents as well as any other cooking method could.

Because the coastal hills of California and the sea and waterways contain abundant and diverse edible vegetation, the Coast Miwok had no need to develop agriculture. They did hunt. Due to the mild climate and their semi-itinerant lifestyles living in small villages, they had no reason to erect large structures or to develop sophisticated architecture. Nature provided all they needed for a healthy life of comfort. So their artistry went into basketry. California Indian basketry is known worldwide for its beauty and complexity.

I possess two beautiful baskets that belonged to my former mother-in-law, Eulalie Braden Wolfer, that I think are Pomo. Now that I'm acquainted with Dr. Shanks, I plan to show them to him and get his advice as to their origin, value, and the best ways to preserve them. One is a very tightly woven bowl shape, with triangular designs; I'm sure it can hold water. The other is larger, also bowl-shaped, but of a coarser grass with the design created by the weaving and texture rather than with colors. I hold them as family heirlooms to be passed to my daughter, from her paternal grandmother, at the proper time.

Gene Buvelot, who is on the Board of the Federated Indians of Graton Rancheria, gave a fascinating update on how several local tribes, not all Coast Miwok, organized and petitioned the federal government in 1970 to recognize them as Native people and restore their tribal status. This was necessary because the government had been informed (by whom I don't know) that there were no more Coast Miwok or other local Indians.

Since 1983, thirty of the thirty-eight California tribes that were terminated under the policy have been restored to federal recognition through litigation and legislation. In 2000, following a lengthy process, the Tribe became the most recent of these tribes to have its federally recognized status restored through enactment of the Graton Rancheria Restoration Act (“Restoration Act”).

After lunch we went to Kule Loklo (bear valley), a native village on the grounds of the Bear Valley Visitor Center, Point Reyes National Park, where we watched Native dancers. We also wandered the village, entering the roundhouse, kotchas (family dwellings), and other structures, and viewing Native crafts and jewelry. Others, mostly children, drilled shells to make beads (like those used to decorate baskets), flaked flint arrowheads, and spun bull-roarers.

Even though it was a very hot, sunny day, the dancers performed around a small fire pit. Several of the dancers were related -- father, son, grandson, nieces, cousins -- as well as being from different local tribes and blends of different tribes. Accompanied by two drummers and a singer, the dancers did group dances, dances for women and girls, dances for men and boys. The men's costumes consisted of feather skirts that they sometimes flounced up in the rear. Of course, these dancers, performing as it were before a mixed general audience, wore shorts, jeans, sometimes T-shirts, under their costumes, when I'm sure that originally these dances were performed wearing only the feather and leather costumes, with no Western clothing underneath. (The Coast Miwok who greeted Drake wore no clothes most of the year because our weather here is temperate.)

I found it interesting that the males dressed in native ritual garb, mostly made of what appeared to be either hawk or turkey feathers -- there are lots of turkeys roaming the hills hereabout -- and shell beads, while the women's clothing, which was also no doubt traditional among these peoples, being made of cotton cloth, showed the clear influence of European fashion -- and modesty. 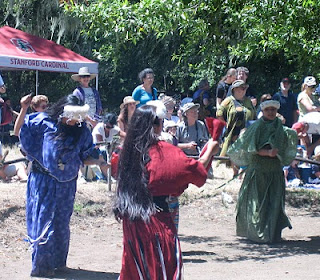 The men's dancing consisted mostly of a double tap with each foot, sometimes crouching and seeming to imitate animals, and often flouncing the tail feathers. The women, on the other hand, carried pieces of cloth draped between their two hands, and they rocked these cloths up and down from side to side as they danced. At certain points in the singing, all the dancers twirled around. The ribbons streaming from the women's dresses and their long glossy hair lifted spread out beautifully as they spun.

I learned from this experience something of how I imagine my European ancestors might have expressed their Pagan lifestyles: Accepting the gifts of the land, sky and sea; celebrating together; making art; expressing their joy in living. This, to me, is the best contemporary Paganism has to reawaken.


* I spoke with Gene after his talk because I want to invite local spiritual leaders to the upcoming Third Annual People of the Earth gathering at the Interfaith Center of the Presidio.

All photos, except that of the basket, by Aline O'Brien (Macha). Basket photo from the collection of The Bruce Museum, Greenwich, CT.
Posted by Broomstick Chronicles at 1:45 AM

It may be that these days Neo-Pagan seekers in Northern California are influenced--to the good for spirituality--by the revival of indigenous Native American groups and tribes. As, for instance, this festival that you describe with such enthusiasm.

But I will add that, as a seeker who grew up in the SF Bay Area during the immediate post-WWII decades, there was scarcely a trace of living indigenous Native American presence to suggest any spiritual influence.

And, even though the past Native American presence was, in school, at least, positively valued (yes, we learned about acorn gathering and marvelous basketry), the absence of Native Americans was passed over. And the brutal reasons for that absence--a rapacious American expansion during and after the Gold Rush on top of a Spanish/Mexican campaign to convert and enslave Native American tribes that could be taken over by the missions and ranchers--was more or less talked about as if it had happened on another planet.

Interestingly, Californians memorialized the disrupted or extinguished Native American inhabitants in place names. Your home county--Marin--and mine--Solano--are named after Native American leaders who cooperated with the Spanish/Mexican settlement. But the sum total of indigenous Native American inluence on my youthful spiritual seeking pretty much amounted to the statue of Chief Solano in fron of the courthouse in Fairfield.
And that I learned how to pronunce "Tuolomne" and "Mokolumne." And my enduring delight at the beauty of the Carquinez (that is, Karkin tribe) Strait and the sight of Mt. Tamalpais in the distance.

Sounds like a good day, getting at least a little bit of a feeling for a different world view as a guest.