On Saturday I led a spiral dance at the conclusion of the wedding of my friends Carol and Chris. Carol is the Executive Director of Marin Interfaith Council. Other officiants were a non-denominational Protestant/Buddhist (who also happens to be a doula), the abbess of Green Gulch Zen Center, a rabbi, and me. One of the ushers was my friend Sister Marion, a Dominican nun. (Her photo is about halfway down the page.) This article tells you what kind of woman she is, and also includes quote about her from Carol, Saturday’s bride.

Her groom, Chris Highland, is what I call post-Christian; he calls himself a freethinker. He used to be a minister to the poor and homeless in the streets of San Rafael and chaplain at the Marin County Jail. He had a crisis of faith and went off to surrender to Nature as his teacher.

The ceremony was supposed to take place in the rose garden at Green Gulch Farm, but since it was pouring rain, we held it in the zendo, an old hay barn.

Even though the dance didn’t really actually work (as a spiral in and out) due to the size and configuration of the space I had to work in and the number of people in that tight space, everyone loved the song and sang it well and smiled at each other and really loved doing it. Lots of people thanked me. One told me that it was way more fun than a receiving line. There were lots of folks there from MIC who’d only known me in meetings and knew nothing of Paganism. So this was a great opportunity to show us at our best and contribute to the interfaith movement. I’m grateful to Carol and Chris for the opportunity.

Anyway, the big surprise to me was that they were gonna pay me! It never occurred to me that they’d pay me to do something so cool. They asked me what name to put on the check, and I told them if they insisted on paying me, to please give the money to Cherry Hill Seminary — not that I couldn’t use it, mind you. They’re off to Kauai for their honeymoon. When they return, if not sooner, they’ll either be sending me a check or donating directly online (which you readers can do by clicking on the link to CHS in this paragraph). 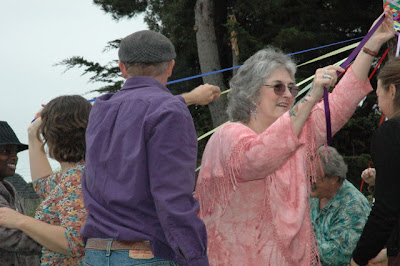 On Sunday Anne Hill hosted her twentieth annual Beltane party. The weather had been inclement all weekend, but the sun came out enough on Sunday for us to dance the Maypole -- the one Corby cut a few years ago, which gets shorter each year as the bottom decomposes in the soil.

Her yard was full of California poppies. There was no way to dance without tromping on them. It pained me. Some people consider them weeds because they grow all over -- they're our California state flower -- but I've noticed a diminishment* of them the last couple of years and that distresses me.
Victoria took these photos. That's Kore in the fedora, Anne in the flowered blouse, Corby in purple, and me in pink -- very unusual for me.

Below the last few folks who still have ribbons are winding it down. 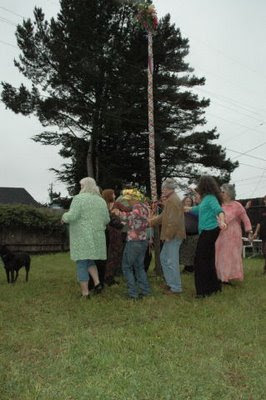 * That's not a word in the dictionary, but it works so I'm using it. Consider it coined.

Posted by Broomstick Chronicles at 1:49 AM