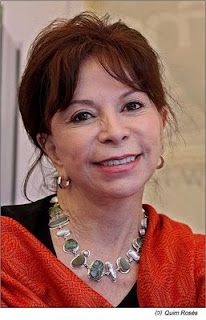 Last night the Marin Interfaith Council honored author Isabel Allende with the Visionary Marin award. While a band played, we wandered around bidding on auction items, dropping raffle tickets in buckets for prizes, and noshing on lovely little tidbits of food at high, small round candlelit tables -- in other words, no sitting down to eat.

I chatted with several of my MIC friends and acquaintances, and recognized a few luminaries of sort: The Rev. Janie Spahr (I nearly introduced myself to her), Jean Shinoda Bolen (a close friend of Isabel's and BFF of one of the attorneys for whom I occasionally).

Leili First, one of our Sufi members, had assembled a slide show showing events of members of MIC. This played throughout the evening until the ceremony began. I was happy to see among them a photo of people dancing the Maypole that I took in Anne Hill's yard some years ago.

When the time came for introducing Isabel and bestowing the award, all the seats were 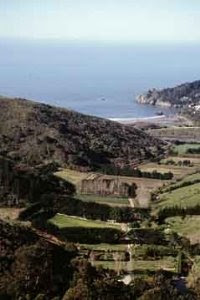 filled except up front, so I caught the eye of Fu Schroeder, abbess of Green Gulch Farm Zen Center, who was in the front row, and she indicated I should sit in one of the empty seats next to her. After the ceremony, I realized I was in the section reserved for members of what Isabel calls her "tribe." (That's Green Gulch Farm in the photo, the way it looks driving by on Highway 1; that's the Pacific Ocean in the distance.)

Without exception, from Buddhist to Roman Catholic, from to Sufi to Presbyterian, from Hindu to Pagan, every single person I spoke with was elated about the election of Barack Obama. Most were also disappointed at the passage of Proposition 8, which changes the Califorinia Constitution to ban same-sex marriages, and which, I am confident, will not stand the test of the courts.

When the Rev. Carol Hovis, Director of MIC, first took the mike, her mention of the election outcome elicited cheers. The election results were obviously on everyone's mind because they were referenced frequently and each mention drew unrestrained applause.

Isabel is a tiny woman with a big spirit. In an inspiring acceptance speech from atop a plastic milk carton so she could look over the lectern and reach the microphone, she spoke of her life and the changes and challenges she'd met along the way. She spoke of her work and of the death of her daughter Paula. She spoke of her relatives in Chile and of her American husband. Several times she referred to the "plums" on her chest. Her beloved maternal grandfather had hoped she'd been a grandson rather than a granddaughter, and only finally accepted the fact that she was a girl when she grew small plums on her chest.

She spoke later of the joys of lovemaking and how both she and her husbands appreciated her somewhat bigger plums. She said that she admired the Dalai Lama, but that he was celibate and she much preferred carnal pleasure in her life. She said when she writes love scenes in her books, she is fantasizing about Antonio Banderas. Towards the end of her speech, she revealed that her husband, attorney Willie Gordon, does not seem to notice that the plums have turned to prunes.

Isabel is about five months older than I. She looks fabulous. At one point she asked the audience if they did not agree that she looked great for a 66-year-old, to applause. She said with a laugh, it's very expensive and takes a lot of hard work.

She spoke of fear and risk, and that being paralyzed by fear was a waste, how life was worth taking risks, that it was not without pain but was well worth it. In this regard, she mentioned her soul mate, Grace, who, with her daughter Sabrina, been in a head-on collision on the Golden Gate Bridge this past May. Grace broke many bones, displaced all the organs in her body except her heart, and lay comatose for many weeks. When she finally regained consciousness, she proclaimed how happy she was to be alive. She said the episodes of pain pass, and when they're gone, she doesn't remember them so she is happy. Grace had been a long-time Zen practitioner who gained enlightenment from a close brush with death. While Isabel spoke of this, I sat next to Fu Schroeder, who happens to be Grace's partner.

Isabel ended her speech with yet another reference to Tuesday's election, saying she is now so proud to be an American. Her last words were, "Yes, we can!" Of course, we repeated this heartening phrase.

When Fu had left her seat to go on the dais to present Isabel with her award, and Isabel returned, Isabel set next to me for the rest of the evening. She loved the California poppies tattooed on my forearms. At the end of the ceremony, I introduced myself to her as the "token Pagan" in MIC, and she said she herself is a pagan. (I use the lower case because she is pagan by nature and in outlook but not by affiliation and practice.) She had already identified herself using that term earlier in her speech. I am not "outing" Isabel Allende on this blog; I am merely stating a similarity in outlook that she shares with Neo-Pagans.

All in all, I felt welcomed with genuine warmth by my colleagues in MIC and comfortable representing a Pagan presence at this significant event.
Posted by Broomstick Chronicles at 12:03 PM

Thanks for this. I met Isabel in person myself some time back, I am a huge fan of her writing, and her herself!

An enchanting account, Macha, and not just about Allende.

Sometimes folks laugh at me when I talk about the San Francisco Bay Area as "New Alexandria." But when you tally up all the religious and spiritual movements and establishments and leaders and inspirers there and the influence they have--Green Gulch Farm and you among them--I know that I'm not making it up.