Just finished reading Barbara Ehrenreich's fascinating study of the history of collective joy, Dancing in the Streets. The occurrences she describes are so like our biggest and best Pagan rites. Here's one of many quotes I could excerpt. This one has relevance to interfaith dialogue.

...[C]ompared to the danced religions of the past, today's "faiths" are often pallid affairs--if only by virtue of the very fact that they are "faiths," dependent on, and requiring, belief as opposed to direct knowledge. The prehistoric ritual dancer, the maenad or practitioner of Vodou, did not believe in her god or gods; she knew them, because, at the height of group ecstasy, they filled her with their presence. Modern Christians may have similar experiences, but the primary requirement of their religion is belief, meaning an effort of the imagination. Dionysus, in contrast, did not ask his followers for their belief or faith; he called on them to apprehend him directly, to let him enter, in all his madness and glory, their bodies and their minds. 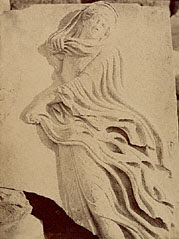 Photograph of "Dancing Maenad"
by Dimitrios Constantin, Greek,
1865, from the Getty Museum,
Los Angeles
I might add that Dionysus is the original Christos, or the god who is apprehended by the worshipper's consumption of his essence. In the case of Dionysus, wine. In the case of the Christian eucharist, the body/bread and blood/wine of Jesus the Christ. The Christos is an entheogen ("becoming divine within").
Posted by Broomstick Chronicles at 12:21 AM

"I might add that Dionysus is the original Christos, or the god who is apprehended by the worshipper's consumption of his essence."

"Original" is such a dangerous word. It's a very old idea, and probably older than Dionysos. In many times and places, Mother says: You are what you eat.

Here's a bit from the Pyramid of Unas, containing some of the oldest writing (http://touregypt.net/featurestories/pyramidtext.htm):

The sky is overcast,
The stars are darkened,
The celestial expanses quiver,
The bones of the earth-gods tremble,
The planets are stilled,
For they have seen the King appearing in power
As a god who lives on his fathers
And feeds on his mothers;
The King is a master of wisdom
Whose mother knows not his name.
The glory of the King is in the sky,
His power is in the horizon
Like his father Atum who begot him.
He begot the King,
And the King is mightier than he.
The King's powers are about him,
His qualities are under his feet,
His gods are upon him,
His uraei are on the crown of his head,
The King's guiding serpent is on his brow,
Even that which sees the soul,
Efficient for burning;
The King' neck is on his trunk.
The King is the Bull of the sky,
Who conquers at will,
Who lives on the being of very god,
Who eats their entrails,
Even of those who come with their bodies full of magic
From the Island of Fire.
The King is one equipped,
Who assembles his spirits;
The King has appeared as the Great One,
A possessor of helpers;
He sits with his back to Geb,
For it is the King who will give judgement
In company with Him whose name is hidden
On that day of slaying the Oldest Ones.
The King is a possessor of offerings who knots the cord
And who himself prepares his meal;
The King is one who eats men and lives on the gods,
A possessor of porters who dispatches messages;
It is Grasper-of-topknots who is Kehau
Who lassos them for the King;
It is the Serpent with raised head
Who guards them for him
And restrains them for him;
It is He who is over the blood-offering
Who binds them for him;
It is Khons who slew the lords
Who strangles them for the King
And extracts for him what is in their bodies,
For he is the messenger whom the King sends to restrain.
It is Shezmu who cuts them up for the King
And who cooks for him a portion of them
On his evening hearthstones.
It is the King who eats their magic
And gulps down their spirits;
Their big ones are for his morning meal,
Their middle-sized ones are for his evening meal,
Their little ones are for his night meal,
Their old men and their old women are for his incense-burning.
It is the Great Ones in the north of the sky
Who set the fire for him
To the cauldrons containing them
With the thighs of their oldest ones,
Those who are in the sky serve the King,
And the hearthstones are wiped over for him
With the feet of their women.
He has traveled around the whole of the two skies,
He has circumambulated the Two Banks,
For the King is a great Power
Who has power over the Powers;
The King is a sacred image,
The most sacred of the sacred images of the Great One,
And whomsoever he finds in his way,
Him he devours piecemeal.
The King's place is at the head
Of all the august ones who are in the horizon,
For the King is a god, older than the oldest.
Thousands serve him,
Hundreds offer to him,
There is given to him a warrant as Great Power
By Orion, father of the gods.
The King has appeared again in the sky,
He is crowned as Lord of the horizon;
He has broken the backbones
And has taken the hearts of the gods;
He has eaten the Red Crown,
He has swallowed the Green One.
The King fees on the lungs of the Wise Ones,
And is satisfied with living on hearts and their magic;
The King revolts against licking the...
Which are in the Red Crown.
He enjoys himself when their magic is in his belly;
The King's dignities shall not be taken away from him,
For he has swallowed the intelligence of every god.
The King's lifetime is eternity,
His limit is everlastingness
In this his dignity of:
"If he wishes, he does;
If he dislikes, he does not,"
Even he who is at the limits of the horizon forever and ever.
See, their souls are in the King's belly,
Their spirits are in the King's possession
As the surplus of his meal out of the gods
Which is cooked for the King out of their bones.
See, their souls are in the King's possession,
Their shades are removed from their owners,
While the King is this one who ever appears and endures,
And the doers of (ill) deeds have no power to destroy
The favorite place of the King among those who live in this land
Forever and ever.

I LOVED that book. So many incredible insights.