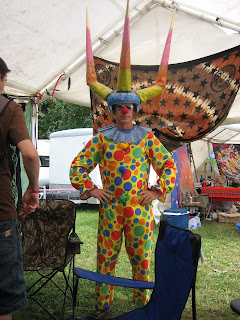 We spent a lot of time schmoozing with Chameleons Ian & Liafal, A.J., Steph, Maddox & little Sydney Ginger. Their pavilion is a communication hub and a welcoming 'green room' for presenters. We sampled some of A.J.'s amazing elderberry mead, as well as all manner of cookies baked by A.J. and his 10-year-old son Maddox. Three-month-old Sydney Ginger was conceived at Starwood '06. Her brother intends to use her as a babe magnet when she's a toddler.

Again this year we feasted with Druid colleagues at the ADF potluck, giving us more leisurely time to become better acquainted with Kirk Thomas from Sonoran Sunrise Grove in Tucson and other Druids from faraway places. They didn't seem to have much familiarity with Northern California groves.

Later in the week we enjoyed the singing of Awen, the duet of Ian and Liafal. Jack from Maryland was enchanted by their rendition of "Jack in the Green," one of my favorite Spring Equinox songs. They also sang a beautiful Stephen Foster song that seems to have made its way into Pagan music, "Hard Times Come Again No More."

Presenter Lon Duquette arrived hungry, and so was I, so I took him over to Phill's Grille for a moderately priced, delicious Mediterranean repast. Phill's food is about a billion times better than you'll find at most Pagan festivals. Lon and I discovered that we had many more friends in common that just the late Tim Maroney who first introduced us some years ago. While sitting there, we also met Tara, who, with my pal Kevin Roddy and others, runs the Fire Tribe Hawaii festivals on the Solstices.

We hung a fair amount with presenters Jo Byers and Tony Mierzwicki. I enjoyed them immensely. Evidently, thanks to my pal Patrick McCollum, my reputation had preceded me because Tony told me what a great connection they'd had with Patrick and how he'd spoken highly of me. Always a great entré. 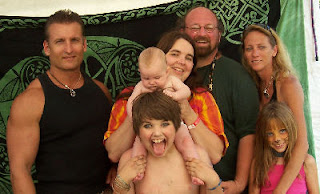 From Tony's website: back row: Tony, A.J. and Jo with
her arm around Michaela. In front of A.J. are Steph,
Sydney Ginger, and her big brother Maddox
I was pleasantly pleased to run into Minnesotans Nels & Judy from Sacred Harvest Festival and old CoG friend Vinnie Russo of Arsenic & Old Lace in Cambridge, MA.

Folks seemed to love my "Buffing & Polishing" workshops (two consecutive sessions). One of the men who came to one of my workshops was a NASA physicist from Florida, there because his children are interested in Paganism and he knew little about it.

One of the more remarkable presenters was Halim El-Dabh, an 84-year-old world-renowned musician from Egypt. His first name is Arabic, his middle name is Coptic, and his last name is Pharoic. A friendly man who hugs whenever the opportunity arises, Halim, accompanied by his wife Deborah, engaged in lively conversation wherever he went. I remember meeting him very briefly several years ago when he was doing a drumming workshop at a PCCO event in Ohio.

Corby and I and other Californians like LaSara Firefox are always blown away by the fire everywhere: luminaria lighting the pathways, campfires, tiki torches, candles in the notches of trees. Above all, fire dancing and twirling of flaming hula hoops as part of the spectacular Friday night fireworks display.

Late on Saturday we convened a panel, because both Ian and I love panels and we love talking with other Pagans about who we are and what we may mean in the world. In addition, Ian likes to talk about that irresolvable topic, thea/ology. This panel was on teaching methods.

Starting with the older known form of Paganism, Gardnerian Witchcraft, Deborah Lipp spoke of the older forms of training and how we cannot, in the present state of Paganism, teach everyone that way. She and I both still prefer that method, one that allows for a more gradual integration of knowledge, skills and experiences into the whole cloth of one's life, with guidance and mentoring. I spoke of Anderson Feri/Faery, since that precedes Reclaiming and is older than Church of All Worlds or ADF. Oberon Zell spoke about CAW, Ian Corrigan (later Skip Ellison) talked about ADF's training methods, I spoke of Reclaiming teaching as I knew it when I was active and as I observe it in the context of WitchCamps, which are an international phenomenon. Later Oberon explained something of his Grey School, a colorful endeavor with, not surprisingly, a strong scifi/fantasy flavor.

I got a chance to describe what we're doing at Cherry Hill Seminary in some detail. I think many there were surprised at the caliber of teachers and courses we have and the high bar we're attempting to set for Pagan seminaries that may follow us.

Although he was not officially on the panel, since there were two ADF folks already there, Isaac Bonewits contributed plenty of commentary.

I think it's fair to say we all enjoyed it. Our frustrations were two-fold: (1) It was scheduled too late, at the end of the day of the last full day of the festival, not a time when people are eager to take in more information. (2) We could have used lots more time; we were all juiced up when our time ran out. 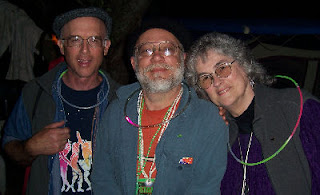 Also from Tony's website: Corby, Gnorm our charioteer
and me wearing our glostiks all ready for the Saturday
night bonfire. 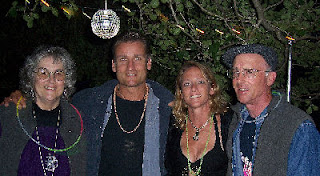 Me, Tony, Jo and Corby. Do we look like we're twinkling?
Bonfires are so primal and So Much Fun, especially for us Californians who have to be so much more fire-conscious. We found the Saturday night bonfire thrilling.

Sunday morning we cleaned up, packed, and embarked on our seemingly endless trip home.

I hope to go to more Starwoods in the future. Long may they thrive!
Posted by Broomstick Chronicles at 10:41 AM

Thanks for this. The panel sounds very interesting. I'd be interested in hearing more about the way training is changing as Paganism continues to grow.