This wicked hot Sunday afternoon the Marin Interfaith Street Chaplaincy held a procession and memorial ceremony for the homeless in Marin who've died in the past year. Through Carol Hovis, Director of the Marin Interfaith Council, I volunteered to participate on behalf of Pagans.

I had done this last December in San Francisco. I offered the same short prayer and longer chant. This time I had sent it to the Rev. Paul Gaffney, the organizer, beforehand. He expressed delight in its appropriateness.

About 50-60 people gathered at Albert Park and, carrying signs, swinging a censor, and chiming Tibetan bowls periodically, walked in silence to the courtyard of St. Raphael's Church. Just in front of the church grounds the interfaith community planted a Japanese red leaf maple, marked by a plaque, in memory of the homeless of Marin who've died in the streets. Prior to the ceremony, marchers placed photographs and flowers in this space. When I returned afterwards to shoot these pictures, the photos were understandably gone; the flowers remained.

Standing in the hot sun across from the reconstructed Mission San Rafael Arcángel, we were welcomed by Father Rossi. Unfortunately, I never got a program so I was not primed for who was doing what when. The 125 names of the dead printed in the program were read by individuals and repeated by all. One was a baby. Some were only first names or nicknames. After the list had been completed, Paul invited the assembly to add others names. About seven more names were added to the memorial. A man read a Buddhist poem.

Then it was time for me to speak Starhawk's prayer "For One Who Has Died Violently or in Great Distress." I could barely see the words on the page for the salty sweat that was stinging my eyes. I taught Anne Hill's and Starhawk's chant, "When We Are Gone," line by line, then two lines at a time, then all four. I was pleased that nearly everyone sang, including the Dominican nuns -- you can always count on the local Dominican sisters to walk their talk when it comes to issues of social justice. When I did this in San Francisco last December, getting everyone to sing was all uphill. The most willing were the Buddhists and the Quakers. Today, we continued the chant for five full repetitions. A man with a deep, strong voice spoke each line after we sang it. I loved it. It enhanced what we were doing. I'd have tried to break us into a three-part round if I'd had a couple of shills in the courtyard to help carry it. I find that when I try to do that myself, people get confused when I sing the first line a second and third time, even when I've told them at the outset that we'll be breaking into a round and I'm looking at and signaling a different segment of the group with each repetition.

Paul concluded with a reading from Isaiah.

As soon as the crowd began to disband to make its way to the Vineyard Christian Fellowship of Marin a few blocks away, a young man wearing a pentacle came up to me and thanked me for remembering to honor Pagans. He said there are other Pagans among Marin's homeless. He lives in a local shelter and attends Mass at St. Raphael's because he was brought up Catholic in Salem, Massachusetts and finds comfort in group worship. He directs his attentions to Mary, Mother of God.

This man, Jon, asked me where he could do ritual with Pagans. I told him about the public sabbats Reclaiming puts on in San Francisco, and reminded him they'd be doing a Lammas ritual this coming weekend. He'd forgotten Lammas was so close. He has internet access so he's going to check Reclaiming's website and go to San Francisco for the rite.

There was press present. I was aware of photographers along the route, and I noticed someone interviewing Father Rossi at the conclusion of the service.

I walked with Paul and his wife Anne and some others to the Vineyard Christian Fellowship. I've been by this place countless times, never expected I'd be in it. There, I chatted with some of the people who'd approached me to tell me they liked what I'd contributed. I felt good about being so welcomed and evidently useful. The event concluded with refreshments, music and socializing in this blessedly air-conditioned space. 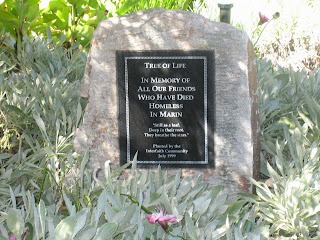 Some of the questions this experience generates are: What is interfaith all about? How can people of so many belief systems work together on a common cause? Why do this? When we do this sort of work with people of other religions, are we not doing a form of magic? My answer is yes.

I want to learn more about the phenomenon I recently found out about called the "protestantization" of religions practiced in America. This is a term used in the field of religious studies. It refers to the tendency of non-Christian religions to adapt a template of the organization of Protestant churches for their own use, even though these religions in their native locations aren't organized that way. For instance, rabbis, originally those who studied Jewish sacred texts and commented on them, now assume additional roles associated with Christian clergy, such as the administration of the synagogue. The Buddhist woman who heads Green Gulch Zen Center isn't a "reverend," but uses that term in the context of relating to the public. Some Pagans use this title, too. I think it's inaccurate and can lead to a separation between practitioners and priest/esses.

Fodder for lively discussion and many more blog posts.
Posted by Broomstick Chronicles at 5:59 PM

Some of the answers to your questions here -

What is interfaith all about? How can people of so many belief systems work together on a common cause? Why do this? When we do this sort of work with people of other religions, are we not doing a form of magic?

- really resonate with questions I've had myself, and I found a lot of really helpful answers in a book called "The Mystic Heart". 'Course, I can't remember the author now, but it's pretty recent.

I love knowing this happened, and that pagans were so beautifully represented.