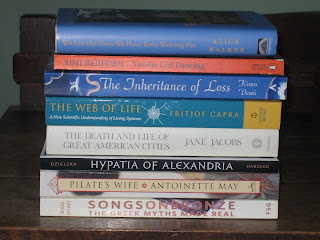 This is my unread but soon-to be-read pile, not to be confused with shelves of other unread books calling me, and shelves of previously read books inviting me to return to their pages. Meaning these are the ones most likely to be read after, or even before, the ones on the pile of books I'm in the middle of are read. Unfortunately, unlike my friends Victoria and Patricia, I don't read a book in an evening. :sigh:

Alice Walker's We Are the Ones We Have Been Waiting For is a Yule gift from my stepdaughter Dr. Lee Wolfer. I'll read anything by Alice Walker. I keep thinking that the words of the title are part of a chant I know from Reclaiming. I've been distanced from Reclaiming for so long that I don't know many of the more recently written ones, and those I do know I don't know as well as the older ones.

Yoruba Girl Dancing, by Simi Bedford, is on loan from Victoria. She thinks I'd like it based on our mutual appreciation of Purple Hibiscus, Chimamanda Ngozi Adichie, who, like Kiran Desai below, has received several literary awards. Purple Hibiscus gives a look into the life of a sheltered young African girl during a tumultuous period of Nigerian history. A life where "good" and "bad" blend so that there really is no black and white. (I'm speaking in terms of behavior, not skin color.)

Those of you who pay attention to contemporary literature will no doubt recognize Kiran Desai's The Inheritance of Loss, winner of the 2006 Mann Booker Prize for fiction and, in 2007, the National Book Critics Circle Fiction Award. I already read this book so I'm mistaken to have photographed it in this pile.

Frijof Capra's The Web of Life interests me because of my ongoing fascination with the interconnectedness and interdependence of everything. It remains to be seen whether I'll be able to understand the book.

The Life and Death of Great American Cities, by the late Jane Jacobs, has been on my list of books to read since I first heard of it, and her, from my late husband Rod Wolfer, who was an architect. When it was recently republished and offered by my book club, I bought it. This book interests me because we are faced with a growing human population, less space for us on our planet, and global warming.

Don Frew lent me Hypatia of Alexandria, by Maria Dzielska, after we'd talked about a novel I'd read and because she is the guardian ancestor of Cherry Hill Seminary.

Believe it or not, Antoinette May, author of Pilate's Wife, was one of my very first students in the earliest days of Reclaiming. Back in the early 1980s she contacted Reclaiming Collective (RIP) on behalf of herself and several women in Palo Alto, CA. Most of them were already part of a women's group, which subsequently coalesced into a coven called Stone Dancers that survives to this day. Though she didn't end up circling with the Stone Dancers, Antoinette, aka Minerva, writes a lively weekly astrology column in the Sunday San Francisco Chronicle that I never miss.

Finally, it's always fun to reread different people's writings about the Greek myths. My mother read them to me when I was a child. Hence, Nigel Spivey's Songs on Bronze: The Greek Myths Made Real.
Posted by Broomstick Chronicles at 2:49 PM

Interesting book pile. I went off Alice Walker when she started appearing to condone female circumcision. I still love The Temple of my Familiar, though.

Thanks for sharing your bookpile. I have a smiliar system--of the 50 or so unread books in my house, only about 5 of them are next in line.

I'm going to check out the book on Hypatia. It synchronizes nicely with what I'm reading now. And it will bump a something further down my TBR pile.

Loved "Songs On Bronze" when I read it last year.

Macha, here's a discussion on where the Walker title comes from. I knew it from the Hopi elder piece.