Corby and I decided it was time to give our kitty Lilith the peace of passing. She'd lost her eye some time ago, and it only got worse, just a dead eye in her head. The vet could do nothing about it. She'd basically been well except for drinking a lot of water because her kidneys weren't working well.

When our friend Raven Moonshadow was ill and dying, he wanted his two cats, Lilith Nightmare (perhaps named for me?) and Shadowfax, to remain together. We adopted them and brought them to live with us and our grey-and-white longhair tuxedo cat, Buster. Raven, who had AIDS-related dementia by that time, had told us that Lilith was 10 and Shadow was 5; that was in 1996. We only know that they were adults when they came to us and both had 10 good years with us. Both were black, Lilith shorthaired and round; we called her our Sicilian cat for her robust swarthiness. Shadow was more elfin, fine-boned, fluffy and longhaired.

Lilith was always the more social of the two. She got out of the carrier first. She greeted people and explored fearlessly. She took longish, for a cat, neighborhood walks with us. She even followed us one night when we were walking to downtown San Rafael. That means she had to cross Second and Third Streets, both main arteries to and from Highway 101. She loved laps but never wanted to be picked up and carried. She protested when we insisted on carrying her across those two streets; we did it anyway. The walk was maybe a mile and a half, quite a hike for a little cat. 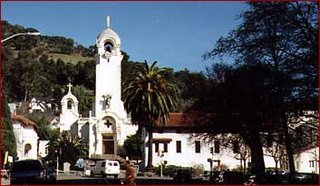 Another time she was sleeping in the sunlight on the roof of the cab of Corby's yellow truck when he ran an errand to the local 7-11. He didn't know she was there and just drove off. People were waving at him and pointing to the roof as he drove but he didn't realize that they were trying to tell him there was a cat on the [hot tin] roof. When he pulled into a parking space in front of the store, this terrified kitty came sliding down the windshield onto the hood. It's a wonder she didn't fall off on the bumpy ride. There was nothing for her claws to grip. Corby put her in the cab and brought her home with his purchases.

We live in a condo complex on Picnic Hill. Lilith spent most of her days wandering around, sleeping in the sunlight on the steep driveway, wandering in the gardens, snoozing amidst the flowers, greeting one and all with her little barely-audible croak and wreathing their legs in hopes of some petting. For some of the younger residents, Lilith was their first encounter with a feline. Lilith made friends with everyone.

She quit eating about two weeks ago and just stayed indoors sleeping, mostly on the couch. She sought affection most of that time and purred when she got it. She loved her lap time. She'd go out on the deck from about five minutes at a time. Neighbors noticed her absence out front; they missed her welcomes and inquired about her well-being.

Sometimes it's difficult to judge when a living being has ceased living and moved on to simply existing in a miserable and often painful state. I've never believed there's any value in unnecessary suffering. I've had to make the decision to euthanize my share of animal friends. I'm glad to say that every one of them lived a long, good life in our family. They'd just reached the point where their bodies had worn out. We took Lilith to the Marin Humane Society where we'd taken her sister Shadow this past June. Lilith went easy, very easy.
Posted by Broomstick Chronicles at 2:23 AM

I'm so sorry for your loss. Our pets are valuable beyond words. I had to put my little terrier down in mid-November. It was hard but she was ready.

Strange how memory keeps something -- or someone -- alive. It seems like part of grief is accepting that your memory's lens is the only place you'll likely encounter that creature again. It is sad, and I am sorry for your loss.

I enjoyed your anecdotes about Lilith. She sounds like quite the cat, and your memories of her sketch out quite the personality.

So Raven's last kitty is now put to rest. I admire you and Corby for giving them a home for all these years. Those cats were lucky to have you, but they probably knew that too.

My deepest condolences to you on your loss.

And your description of her as a Sicilian cat because of her swarth!