From Peak to Pits

My day started out high from last night, when about 30 of us met on the hill to dance with the ancestors. It turned out to be a beautiful night, cold with a bright gibbous moon and wisps of clouds.

Starting with kEATH being an excellent gatekeeper, to Prudence’s witchy challenges and admonition to keep solemn silence, to the exquisite magic of those witchy voices (Corby, Pasha, Patti, Denise, Nicole, Maenam and whoever else I may be forgetting), the the purifications done so carefully by Juliana and Karen, to the partially lighted broken steps, courtesy of Kirk and Tansy -- no one had any accidents, thank the gods! -- to the welcoming and everything that came afterwards.

I loved the way people came together with salt and water in the absence of tools and supplies: plastic cup from someone, green tea, and flakes of salt and pretzel from a snack bag of pretzels.

I love the silent walk through the dark tunnel. I love the opportunity to sit in silence at the top of the hill while all, living and dead, gather.

This was the first time I heard every single name. I found myself leaning forward and listening intently to every soul Victoria called. The widdershins walk and chanting “what is remembered lives” fostered a trancelike state of mind.

I loved the silence while we communed with the dead before we danced the spiral beneath Moon and the swirling spiral of clouds.

The energy of that spiral dance Denise led, for me, was a sweet as they come. Utterly lovely, and loving.

I like seeing who actually turns up. If they don’t want to make the effort, they miss the magic.

This was the first year without Vibra; we missed her. I also missed due to last-minute crises in their prison ministries, Patrick and Barbara, for whom this is the only ritual of the year they have no responsibility for and can simply surrender to.

So when the doorbell rang today and the UPS man delivered a surprise package, I was in a good mood to receive whatever it was. It turned out to be a five-volume series of religious studies textbooks called Introduction to New and Alternative Religions in America, edited by Eugene V. Gallagher and W. Michael Ashcroft. British scholar and eco-Pagan Adrian Harris and I co-wrote a piece called "New and Alternative Religions in the United States: Ritual and Neopaganism" in the volume entitled Metaphysical, New Age, and Neopagan Movements." I note that several other colleagues from the Nature Religions Scholars Network have also contributed. I must say it's a heady feeling to be in a textbook. This is my first text contribution, other than encyclopedia entries. I'm working on another for a high school textbook now.

Yesterday in my fit of Hallows posts, I scanned a photo of my paternal grandparents. I also emailed it to several family members, including my cousin Gerry Gregorio. Gerry and I had recently renewed our close childhood friendship -- there was never any falling out, just poor correspondents and life getting in the way. She still lives in the same town where our grandparents and fathers lived all their lives, Moorestown, NJ, across the Delaware River from Philadelphia. Last November her husband Joe brought her to Philadelphia for a brief visit at the hotel when I was there for the AAR. She had been suffering from colon cancer. She put on a brave face, but I could tell that the visit was taxing her. It was clear that Joe was devoted to her. We had fun catching up, we took some photos, and then I lost my camera later that night. That was the last time I saw her.

This evening I received an email from Gerry's daugher, Nicole, telling me that Geraldine Frances O'Brien Gregorio had passed away on September 17th. In the confusion of grieving and making arrangements, the family had forgotten to notify the few of us here on the West Coast. Here's a photo of her taken last May with daughter Nicole and grandson Chaz at the latter's confirmation. 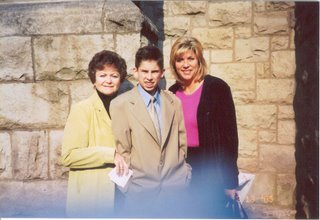 I'm very, very sad she's gone. I didn't have her name to call last night. I'll dance with her next year.

What is remembered lives.
Posted by Broomstick Chronicles at 12:33 AM

Bright and dark blessings and love,

Eugene Gallagher is grand. I hope you do get to meet him. I had the pleasure of having breakfast with him at the AAR in Denver years ago. Say hello for me, if you think of it.

I'm very sorry about Gerry. I'm finding it comforting this afternoon to relax with your blog, sister. (this is Holli, can't remember if I have an ID or not and no energy left to look it up today)