I don't intend for this blog to be a photo album, but sometimes you just can't help it if you have something visual you want to document or show off. Today it's the latter. My left arm is just about completed; it may only get some minor touch-ups.

This first photo shows both arms, one with only the outline, as shown in a previous entry. 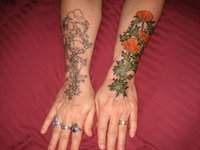 The second one shows the color, except that my skin is still traumatized and a bit swollen because it was only completed hours ago. At it heals, the shadings will become more distinct. 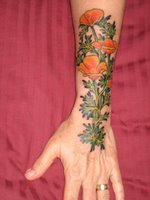 For the next little while, I'll be posting mostly words.

On a different matter, I'm really happy about the election results. Most of the candidates and propositions I voted for won. That's a novel experience for me, since usually my vote is the kiss of death. The Dems have the House; the Dems have the Senate. Nancy Pelosi is the first woman Speaker of the House and third in line for the Presidency. (Does that give you any ideas?) Now if the Dems would only show some spine. We need more than the few like Barbara Lee and Lynn Woolsey to speak for constituents of my sentiments.

More, we have the first Socialist Senator in many, many years. Of course, you've read all this a zillion other places, but I wanted to join the rejoicing.

Now it's time for the Greens, my party of choice, to elect people to fill local and regional offices, and work their way up the way the religious right did. We cannot afford the luxury of not being organized and well-funded.

That is just breathtakingly beautiful! I can hardly wait to see them both done.
Thank you for posting the pictures and letting us be part of the process.
Nairn in Ontario, Canada

I want to lick them.

I think it's at least a high compliment.