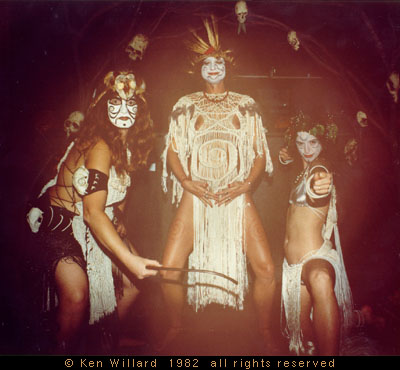 This is one of my favorite photos. Taken by the late Ken Willard either before or after, but not during, the Spiral Dance in San Francisco's Women's Building in 1982, it features Sequoia as the Crone, an eight-months-pregnant Cerridwen Fallingstar as the Mother, and the Maiden will remain unnamed because I suspect she's in the broom closet back in her home state in Dixie.

This year the Spiral Dance number 27 is in Kezar Pavilion, a basketball stadium in the Haight-Ashbury District with an incredibly live, bouncy floor, a delight for dancing. I'll be proclaiming the feast.
Posted by Broomstick Chronicles at 3:16 AM