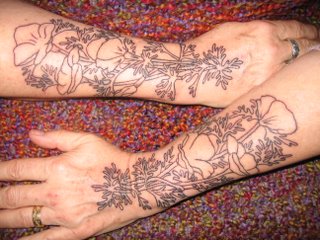 Here's the results of my first session with Heath of Spider Murphy's Tattoo right here in San Rafael. This was the first tattooist I've actually been able to reach and make an appointment with since starting to search for one in August. I'd hoped Madame Vyvyn Lazonga could have done it, since she's done most of my others and I really like her, as tattooist, as friend, as innovator, as a committed feminist and independent woman, as an artist, and as Pagan. But alas! she's in Seattle and wasn't coming down here for that tattoo show at the Cow Palace that month.

These poppies turned out larger than I'd imagined, but glorious, methinks. They needed to be this large in order to get the detail that I wanted. They're just about the size of live poppies. The black outlines will be barely visible; they're just there to define the shapes. I wish they could be done in time for the Spiral Dance and Samhain itself, but Heath doesn't have any more open appointment times before then. Maybe he'll have a cancellation. It'll be interesting, and challenging, to see how he captures the subtle coloration of the leaves and flowers on my aging skin.

I'm publishing this photo to show you a work in progress. The next time I mention these new tatts they'll be brightly colored. Once these are done, I'll be satisfied that I have all the tattoos I want in this lifetime.
Posted by Broomstick Chronicles at 1:35 AM

Those are some serious tattoos. Are the flowers Eschscholzia californica (California poppies)?

Beautiful body art, Macha. They look like they belong on your skin.

Getting my first two after Samhain. I've found my artist, and I am stoked.

I loved seeing them on Saturday. The lines were more subtle in person than they appear in this pic.