It's a Generational Thing: Musing on Our Youth 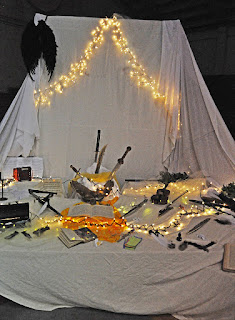 Greg Harder  © 2011
At this year's 32nd Annual Spiral Dance Samhain ritual, amidst about 15 glorious altars, the East altar in particular delighted me.  I found it beautiful with all the white and lights and several different kinds of knives.  One of my most valued magical tools, the blade clearly fosters discernment, allowing us to separate this from that, truth from fantasy, fact from fiction, the pertinent from the irrelevant.  With it we can delineate crisp boundaries when we want them.  We can envision blue flame when we trace sigils in the air with the tip of the blade..

Also on the altar were feathers and wings, a recorder and a violin and bow, an open book of musical notations, and other books.  Books!  Intellect!  Something I value highly and find undervalued and underused in many Pagan communities.

When I asked who created this altar, I learned it was the youth from Teen Earth Magic (TEM).  They obviously have learned their magical symbolism well.  From the looks of the altar, they also enjoy working together to create something of beauty to share with their larger community.

Once the ritual had begun, I sat watching various invocations being offered, waiting for the activity I had really come for, the big, intoxicating spiral dance itself, when I was shocked out of my complacency by a powerful invocation that stood out among all.  About six young adults came into the central circle amidst the big crowd, and they called, "Beloved Dead, we call you."  From various parts of the crowd arose black-veiled persons, each making her or his way to the center and joining one of the living callers in an embrace.  In silence.  The reverence, respect and love embodied in their invocation honored the memory of all those we love who have passed from this world of the living in a way not often seen.  With minimal words, masterful movement, and solemn silence.

I learned that this invocation of the Beloved Dead had been created by guess who?  The young people from TEM, with the help of dancer and performance artist Keith Hennessey.

These are kids who grew up in our community.  Many attended Witchlets in the Woods family camps with their parents when they were younger, then joined the older kids in TEM camp.  I know a few of them a bit and one well.  Many of their parents are the generation of my children.  When my contemporaries were young parents, our Craft was truly occult, being hidden deep in the dark recesses of the broom closet.  As a movement, we were comprised of younger adults rather than having grown up in Pagan families.  All of us had sought, and ultimately found (and/or created/co-created), an alternative, more spiritually satisfying religion from the ones, in any, in which we were brought up.  Most of us came to Craft from mainstream Abrahamic religions.

I'm heartened to know that these children are hearing our ancient, and new, stories, learning songs and magic, being steeped in Pagan ideals, all changes that enrich our Pagan culture.  As it behooves younger people to listen and learn from those who've walked a Pagan path ahead of them, so too it gladdens the hearts of those of us who are older to listen and learn from our vibrant youth.  Only when all of us -- the full spectrum of humanity, from the Beloved Dead through all the ages of the living, to the yet-to-be-born -- work and play in concert can we enjoy a religion that draws upon ancient wisdom, applies our knowledge and creativity to the present we inhabit, in pursuit of a sustainable world for all humanity.
Posted by Broomstick Chronicles at 4:36 AM

Macha, thanks so much for your beautiful words about the Teens! I am continuously inspired by them, too!

You are right on it Macha. our teens are amazing. love rose