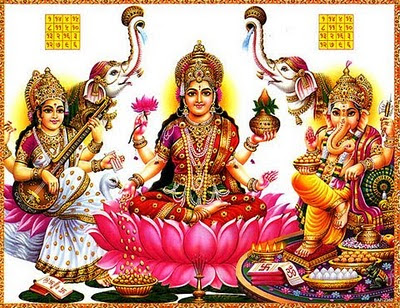 Since deep in my Witch's heart I feel much sympatico with Hindu beliefs and practices, I consider myself fortunate to have been invited to to assist in the performance of the ritual referred to in this press release. Amadae, a Dianic priestess, coordinated the ritual with people from the Hindu American Foundation. Its purpose was devotion (bhakti) to the Great Mother.

There was a two-sided round altar, with Hindu altar objects on one side and Pagan ones on the other. Reclaiming priestess Kala created the Pagan half of the altar. After the puja mentioned below, flowers and petals adorned both altars.

The ritual opened with the beautiful singing of Sangeetha Venkataraman; Corby and I had the pleasure of hearing her at the HAF Annual Dinner last September.

The sitar player, recently moved to the SF Bay Area from Ann Arbor, is a student at the Ali Akbar College of Music about a mile from our home, where he works with Arjun Verma. Arjun was one of four performers at Marin Interfaith Council's Annual Music of the Beloved sacred music concert last month. I invited my new friend to let me know when we might find a chance to visit when he's in San Rafael. I hope he does.

The pujari who led the Devi Ma puja and the men who sang with him had strong voices, made louder by the unnecessary use of a mike. This was unfortunate because we were performing in a hotel ballroom, separated by not-very-soundproof, floor-to-ceiling movable partitions from adjacent hotel ballrooms where other PantheaCon events were taking place: Yes They Are! queer gods ritual on the West side and Tarotist Mary Greer on the East. Having been in rituals in these ballrooms when another, sometimes louder event is taking place right next door, I know from past experience that it's a challenging situation for all. In any case, the men chanted for about 20 minutes. I was pleased to find that I was able to understand some of the words they chanted from having gone to many Kali pujas in my town and from kirtan singing.

After that, six lovely temple dancers, with bells on their ankles, exquisite gestures, and smiling faces, arrived to perform a dance to Lord Ganesha so that he may remove all obstacles to the worship of the Great Mother. This dance made me misty, for some reason. I later learned that none of the dancers was over 18 years old, and they had to perform these prescribed dances perfectly for years before they can perform alone.

The dance concluded with a spiral dance led by Amadae, to the chant "We all come from the Goddess..."

As a ritualist, I felt that we Pagans had more flexibility to adapt our ritual to age-old Hindu practices than the other way round, and we did. The fact that the participants wore big smiles at the conclusion convinces me of its effectiveness for each individual participant and as an interfaith collaboration. Those I spoke with expressed pleasure in the working.

As far as I know, this is the first anyone has blended traditional Hindu practices done by traditional Hindu practitioners (as opposed to Western attempts verging on cultural appropriation) with contemporary American Pagan practices. I was pleased and honored to be a part of it, and I was proud of my Pagan colleagues. I hope other opportunities to share sacred space with our Hindu friends present themselves. I will be ready.
Posted by Broomstick Chronicles at 12:31 AM