Gregory Bunker
September 3, 1948 - December 29, 2010
I was shocked to receive a call today from my sister Catherine telling me that our friend Greg had suffered a massive heart attack yesterday while vacationing with his wife, Stephanie, in Santa Barbara. She said Greg's two sons, one of his sisters, and Stephanie's sister were all on their way there, but that last rites were being performed, and the situation did not look good.

I immediately lit my Brigit candle and said an urgent prayer for Greg. By evening, Catherine called to say Greg had crossed over. What a sweet man he was, and what a great loss his death is to those who loved him, and to many he served.

Greg used to drink too much and eat too much, but in recent years he had been sober, dieting, and had gone back to college, where he'd been earning straight A's. His major, "Organizational Behavior & Leadership," could only enhance his work as Executive Director of Francis House, a counseling and resource center for poor individuals and families in Sacramento. Here's an article on Greg's passing from the Sacramento Bee.

Greg grew up in Ohio, one of eight children in a big Catholic family, then served in Vietnam in his young adult years. I'm so glad he was one of the fortunate soldiers who returned alive. I suspect his experiences in Vietnam influenced his choice of profession, since he undoubtedly had a lot of sympatico with the many homeless who are veterans of that war and whom Francis House serves.

Greg also served on the Board of Safe Ground Sacramento, "protecting the human rights of homeless people."

I remember when Stephanie met Greg and then fell in love. I remember their wedding on the banks of the Sacramento River when my Deirdre was a toddler. I remember once, when my late husband, Rod Wolfer, and I had a big party in our flat on the Mason Street cable car line in North Beach and someone had called the police about the noise. This was during the years when the TV show "All in the Family" was popular. I remember looking over the railing down into the stairwell where Greg was talking to the cops. They asked his name and he answered "Greg Bunker." For some reason his surname had never registered with me, although I undoubtedly knew it, so when he gave that name to the policeman, I laughed, thinking it was a fake name in homage to the character Archie Bunker. 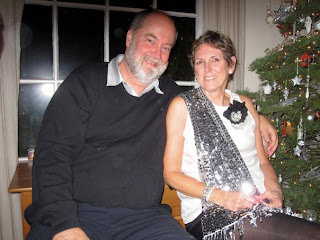 This photo of Greg and Catherine was taken on Christmas Day, only four days before his passing.

Greg and Stephanie, although not technically blood relatives, were, and are, a part of our family. We have celebrated weddings and births and memorials together. He leaves to mourn him his wife Stephanie, sons Jesse and Simon, siblings, and a host of others whose lives were enriched by having known him.

Gregory wasn't Jewish and neither am I, but Greg was the kind of man the Yiddish word "mensch" was meant to describe: a stand-up guy who always made you feel good to be around, always smiling and caring. In love may he return again.
Posted by Broomstick Chronicles at 11:29 PM