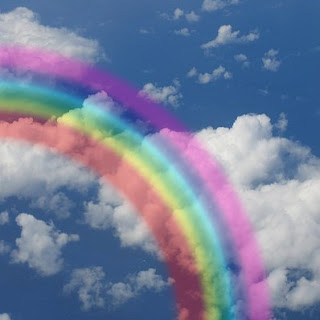 * The Hagia Sophia was rebuilt by Justinian in only five years.
Posted by Broomstick Chronicles at 2:28 PM

Generally, the meaning of a color varies from culture to culture, country to country, religion to religion, etc.

Rainbow world sounds great to me, it gives this dark and gloomy place a bit of hope and a lot of magic.

I like to dress in different colors to honor the seasons and various Goddesses also; how boring just one set color scheme would be! Personally, I like a little room for movement in my spirituality.
Happy Wednesday!

Agreed on the rainbow world. Colors do have their specific measurable energetics, but the meaning and interpretation can be quite personal. I like to wear certain colors for ritual and spellwork, and other colors on a daily basis. Rainbow is good. Rainbow is choice. I applaud that ... and you!

I miss your blog posts!!

While we haven't ever asked anyone specifically to do so, at the open rituals I most frequently attend people tend to wear the appropriate range of colors for the occasion. I find that it gives me a sense of mirroring that amplifies the energies, like a reflector doubling a candle's light.

Why are the colors in the rainbow on your picture in reverse order?