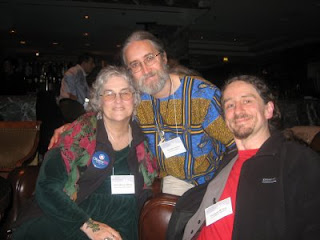 My friend and colleague, Jason Pitzl-Waters, has posted about the recent AAR Annual Meeting in Chicago. There's so much to say, so much juicy thinking crammed into a few days a year. For the most part, I had a great time. The air was charged with excitement about the then-upcoming election. I was as excited as anyone, wore my big Obama button at all times. The streets were being blocked off in preparation for the big celebration in Grant Park, directly across the street from the hotel where the main action of the AAR was taking place.

(Photo of me, Graham Harvey and Doug Ezzy, taken on my camera by someone. ?)

It's challenging for a night owl to make it to morning presentations. Sharon and I stayed at The Palmer House, not at the Hilton Towers where most meetings took place. That first morning we hustled to the first session of the Contemporary Pagan Studies Graup and Religions and Popular Culture Group. Chaired by Doug Ezzy from the University of Tasmania, its them was Talking with the Dead.

Sonja Spear of Indiana University gave the first paper, entitled "Haunted Irvington: Civil Pride, Memory, and the Klan." We came in during that presentation so missed much of it. She had photos and talked of an old house said to be haunted that was now owned by a Lesbian couple -- let's hear it for legalizing same-sex marriage!

Anne R. Key* of CIIS illustrated her talk, "Los Muertos Tienen Sed, los Vivos Culpas (The Dead Are Thirsty, and the Living Are Culpable): The Use of Image in Rituals Honoring the Ancestors in Pre-Conquest and Modern Mexico," with wonderful photos of many kinds of El Dia de Los Muertos altars from throughout Mexico. She explained the meanings of such things as marigolds, arches, marigold-petal paths, Katrinas, and cut paper designs on the altars, as well as the differences among the several days of the celebration. For instance, one day is for children who died, another for the unnamed, etc.

Following on the theme, Chas Clifton of Colorado and Wendy Griffin of Southern California presented on "Campus Pagans and the Day of the Dead: Civil Religions and Cultural Boundaries." Speaking from the perspectives of a small, state-supported university in Pueblo and a large, state-supported urban university in Long Beach, they too had photographs of El Dia de los Muertos altars, albeit less traditional ones. Their talk underscored how much more visible Paganism is and questioned the boundaries between "traditional" Pagan practices and Neo-Pagan syncretism.

Jason Winslade of DePaul University walked in the liminal realm between speaking about and doing by using a few props: hats and candles. His paper was called "'When the Veils Are Thin': An Occult Performance Theory." I'm eager to learn more and hope he will be able to join us at Cherry Hill Seminary soon.

Most exciting of all was Adrian Harris' paper called "The Halloween of Cross Bones," about a modern urban shaman named John Crow (aka John Constable) in London and the last resting place of a class of medieval streetwalkers known as the Winchester geese, with whom Crow had been in psychic contact. Here's some history and images, including shrines to the geese, of the Southwark area south of the Thâmes

And that was only the first session, folks!

* Anne R. Key is also the name of one of the Sisters of Perpetual Indulgence, for obvious reasons.
Posted by Broomstick Chronicles at 12:55 PM

You & Chas Clifton have made me very very sorry that I missed this conference! Does AAR publish a collection of each year's papers, or do they just appear all over the place?

I'm unaware of any such publication. They do publish a scholarly journal with sometimes interesting papers and reviews. It comes with membership.

Often these papers appear elsewhere. Sometimes they're tried out at the AAR for feedback.

It's all overwhelming and wonderful. Next year the Annual Meeting is in Montreal. It's unlikely I'll have the finances to afford it, but I remain optimistic.

Thanks. Montreal's probably a little too far away (from AZ) financially speaking, for me, too.

2010 is in Atlanta, then San Francisco. You can see past and future meetings sites here:
http://www.aarweb.org/Meetings/Annual_Meeting/Past_and_Future_Meetings/default.asp
For recent years, this site also provides program books and abstracts of the papers.

In my experience, presenters are usually generous with providing electronic copies of their papers. If there are any you see that you're burning to read, contact the presenter and ask. Good luck!

Looks like Montreal might be the year for me, since it is much closer than the other cities! I will probably apply to give a talk.
Glad you had such a great time!

I contacted Adrian Harris about his Halloween of Cross Bones presentation, and he is emailing me a copy of the paper w/photos.

I will definitely be in Montreal! What better excuse to visit the city? (Okay, I can think of many better excuses, but this is a good one too)