Masks of the Goddess 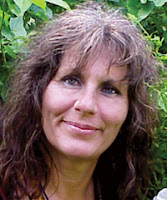 My friend Lauren Raine created a set of exquisite leather masks of many goddesses for the 20th anniversary of Reclaiming's Spiral Dance Samhain ritual in 1999. I think we used about twenty of them; I wore the Morrígan, the baddest-ass Morrígan you ever hope to encounter. Even my friend Urania who helped me put it on was afraid once it was in place. To add the effect, I reddened my palms and displayed them as the Washer at the Ford in the processions.

Bad-ass Morrígan
I was displeased with how this use of the masks for the goddess invocation was done. I thought they were given short shrift: a three-minute invocation sung by the chorus, as opposed to eight minutes for the god invocation. What's wrong with this picture in a goddess religion? My displeasure, however, inspired me to create a ritual that I felt was worthy of the glory of those masks.

For PantheaCon 2000 the following February I whipped up a ritual using 13 of the masks. I say whipped up because I had almost no time to fill the ritual time-slot I was asked to fill due to the withdrawal of a concert performer. In spite of our rush, it came off well. At least people said they really liked it. One liked it so well she asked me if I'd do it again. I said I could only pull something like that off if I had a sponsor. I'd love to produce more original Pagan-themed public rituals if I can. I think I have a flare for it. But alas! you just can't do projects of that scale without a good, solid sponsorship and trusting collaborators. Here's the program description:

With the sponsorship of the Lilith Institute and the New College of California Women's Studies Department, I was able to recreate, even better this time. The script was written mostly by me; some pieces were written by Mary Kay Landon and one, Brigit, by Diane Darling. Because of a local goddess lecture series called The Goddess Is Alive, I had to give the ritual a new title to avoid confusion. I settled on "A Rainbow of Goddesses," even though I think "Goddesses Alive!" is perfect.

This time we had original music for each goddess by Amy Luna Manderino (koto music for Amaterasu, Mexican guitar for Guadalupe, chimes for White Tara). We also had a little chorus I called "Corby & the Arctoi," since the single male voice was Corby's and most of the other singers were young women and teens. Jan Dance flew from Portland, OR to drum.

Hekate, Valley High.
This mask is the face of
our late friend Judy Foster.
Luna's jazzy-bluesy composition
was absolutely perfect -- for both Hekate and Judy.
Laura Janesdaughter flew up from Los Angeles to do Amaterasu.

Dawn Marlowe and friends drove from San Bernardino so she could do Oshun.

Oshun, Dawn Marlowe
And Willow Kelly and Crow came all the way from Virginia so Willow could wear the Isis mask. Tansy Brooks, a belly dancer and keeper of snakes, danced with her snakes as Inanna; one of them slithered up her neck and over the the queen's crown while she danced.

There's so much more to tell about this ritual. Did I mention it was performed in the dark? And boy, was it low-tech! I loved it.

Other ritualists took off with the idea and created goddess masks rituals of their own. Some used newer goddess masks Lauren made in the years since Goddesses Alive! I had always hoped to recreate the one I did using the 13 (for the number of lunations in a solar year), but alas! they are now to be released into the universe of art lovers and Pagans everywhere.

This is your chance to bring one of these gorgeous images into your home. Go here, feast your eyes on all of them, and put in your bid

Visit Lauren at her Threads of Spider Woman blog. Tell I said hi.

* All mask photos by Tom Lux except that of Pele.
Posted by Broomstick Chronicles at 4:36 PM