It’s just about one year from the time I disaffiliated myself from my longtime Craft tradition.  This seems like a good time to reflect on whether, and if so, how, my life may have changed.

At first I felt relieved, and I still do.  But in a way I felt I had performed an amputation, and even the cleanest amputations involve the shedding of blood.  And the necessity of closing the wound, stitching the gap together, and learning to reuse the limb as much as possible, perhaps with the aid of a prosthetic.

I also felt anxious and worried about what friends I might be losing, if any.  My anxiety befitted the situation, because I did lose friends.  Oh, some protested undying love while in the same breath disavowing my experiences.  Others simply avoided me.  Among those who’ve avoided me are Witches I have sponsored and/or initiated, and that really smarts.  Not all of them, I’m grateful to be saying.

I also felt at sea in terms of firm footing, like someone seeking to stay upright in a turbulent oceanic storm.

This was not a good feeling, and it was exacerbated by a flurry of unwarranted, inaccurate, and unsustainable ad feminem attacks by people who don’t even know me polluting cyberspace on listserves and Facebook by accusing me of various kinds of “un-PC-ness.”[1]

In counterbalance, many people praised my decision and offered lots of moral support.

I guess it takes a critical change to bring out the best and the worst.

As some of you know, my grandson Ian appeared out of nowhere last April.  With that connection, I began to learn more about my biological son, Nick Kappos.  I had hoped both to share my community with Ian and to honor Nick’s life at my then-community’s annual Spiral Dance Samhain ritual.  I had arranged to have a section of the North altar for a memorial to Nick.  My decision in August to leave Reclaiming made the question of my following through with this altar difficult.  In some ways I wanted nothing to do with the ritual or anyone who might be there.  In others, I really wanted to publicly honor his memory, and I knew that there would be plenty of people there who’d be glad to see me and whom I’d be glad to see.  I deliberated.  I consulted.  I pondered.  In the end, I took my pal Sparky’s advice and went surrounded by family:  my partner Corby, grandson Ian, Ian’s mom Tuesday, and his then-girlfriend.

Ian and Tuesday both had some snapshots of Nick.  I digitized some, then printed and framed them for the altar.  Tuesday brought a plaid shirt like Nick used to wear, and some foods he liked.

While we were erecting the memorial, some of my friends greeted me warmly, and graciously acknowledged Ian and the others, but not without a bit of awkwardness.  During the time before the ritual began, others gave me big smiles and heartfelt hugs, while others entirely avoided me.  Sometimes I caught a glimpse of a distasteful grimace directed my way. We simply sat as a group in one section and observed the unfolding of the rite.  I told them to hold on for the dance.

The dance itself, as always, I found intoxicating.[2]  Everyone in our party danced, and enjoyed it, while I participated from the center where I had a chair for when I needed to sit.

I’m glad I went, but attending served as the first of several tyings up of loose ends.  I have no desire to go again, although Ian plans to bring friends this year just in time to dance the spiral.

Since then few have made any effort to keep in touch, even those with whom I had been close for many years and who’d been mannerly in our encounters there.  I have made some tentative efforts at reconnecting, but they’ve not resulted in anyone meeting me in the middle.  So I’m not considering those relationships to be viable at this point, although I keep the doors of communication open.

The Spiral Dance was in October.  By the time January had come along I had been invited to present at the Claremont Pagan Studies Conference where’s I’d spoken in the past, with the specific message that those organizers did consider me to be part of their community.  How kind, how affirming, how validating!  I thank them with all my heart.

I have also remained as welcome a participant in a Gardnerian coven as I had been prior to my disaffiliation.  Corby and I usually join them for sabbat rites and they have assured me that I have one foot firmly planted with them.  I’m grateful for that comfort.

Then in February I celebrated my seventieth birthday, Corby his sixtieth, as well as our twentieth year together with a big once-a-decade party.  A few Reclaiming friends responded affirmatively to our invitation as soon as we sent it, said they wouldn’t miss it.  When the night arrived, however, they didn’t show up.  Only four people who are presently active in local Reclaiming groups came to celebrate with us.

At this point, some don’t return my phone calls or emails.  My analysis is that these few folks perhaps found it useful to cultivate my involvement in internal political differences of perspective when it seemed useful to them to have my support for their positions.  Now that I am no longer a factor, I am also no longer worth the bother.  I remain open to being proven mistaken in this analysis.

A young man approached me at a Reclaiming Brigit ritual the year before I left and told me he was newly initiated and “of my line.”[3]   Wow!  This comment gave me pause, because Reclaiming ostensibly is not a lineaged tradition.  Initiation has never been considered a requirement for any level of involvement.  In fact, there was a time when the very notion of needing to be “authorized” by another to call oneself a Witch was anathema to many.

Over this past Fall and Winter I contacted everyone in whose Reclaiming initiation I had any involvement[4] and created a lineage tree. This tree includes dates, places, personnel, and any specific memories from those I contacted and from myself.  I then sent a copy to each of these persons.  With this I tied up another loose end.

For most of Reclaiming’s existence, and more formally (although even using the word “formally” stretches its meaning) since the formation of BIRCH[5], I’ve had a habit of noting to myself such things as what chant was written for what purpose when, leading me to take on the task of history and lore-keeping.  In March I passed on all historical and lore materials I had and listserve ownership to the poet Slippery Elm.  I was relieved to have tied up another loose end. 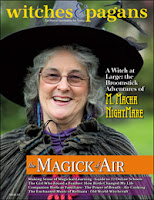 On the plus side, my colleagues at Cherry Hill Seminary continue to appreciate my involvement and contributions.  Interfaith organizers respect me and invite my participation.  Many Pagans have expressed support for whatever work I do in service to the wider community.  Witches & Pagans magazine published an interview with me and featured me on the cover.  I was invited to contribute to two more blogs: Witch at Large at Pagan Square and Wild Garden: Pagans in the Growing Interfaith Landscape at Patheos. Starr King School for the Ministry hired me as adjunct faculty to teach course called Ritual Theory & Liturgical Design this past Spring semester.  That experience bolstered my confidence and reaffirmed that my offerings have value even beyond the little Pagan pond.

At this point I still feel somewhat unmoored.  This feeling intensifies at each approaching point on the Wheel of the Year.  But overall, I’m regaining my balance.  I’m grateful for the support and love I have in my life.  I’m blessed with a loving family, precious friends, and countless experiences in a long life in the Craft – experiences wonderful and dreadful, powerful and scary, practical and magical, profane and sacred.

Blessings to you, Aline. You're describing human nature which is often stupid and venal as well as honourable and gentle. I spent a decade as part of an entwined and dedicated community with friends and compatriots who swore undying fealty. Lots of breathless poetry, lots of perfect love and perfect trust and in the blink of an eye, almost all gone. Those who're still in contact are worth my time.

Narratives simplify things and people have never been good at dealing with complexity. I hope this coming season of harvest and community brings you worthier friends and connections.

I am an occultist, not a witch, and came across this casually. I found it a beautiful bit of writing, very insightful, and full of wisdom and guts. Thankyou for writing it.

Honour to you lady; where ever you go the people around you will gain an elder.I wish you well in this new phase of your life.
Josephine McCarthy

A decade or more ago I went to one of your speaks, you spoke on ritual, public ritual, I was captivated by your words and the intense feeling behind them. Since then I have been happy to read what you write, anywhere you write it,this Blog is wonderful.

I am so sorry that you felt you had to take the actions that you did, but honesty is better than being somewhere you no longer feel at home. Those who do not keep their oaths, that sever friendship, that shun, really underscore the reasons you left in the first place.

Respect to you, thank you for your teachings, and dance on sister, you do not dance alone.