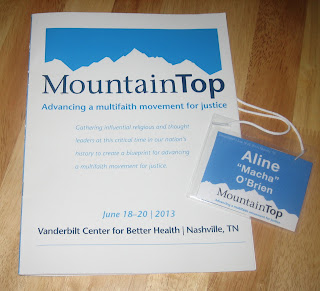 Back in February I received an invitation to an event called “MountainTop: Advancing a multifaith movement for justice” convening in Nashville, Tennessee, over three days in June.  The invitation said this was a “summit of established and emerging leaders inspired by their faith, heritage or core values. … [to] work together to establish the multifaith movement as a platform that informs, invigorates and inspires other inclusive social change initiatives and promotes collaboration.”  I accepted.

After a long, miserable and tiring day of travel, I arrived bleary-eyed but with an open mind and no agenda.

We met in a remarkable facility called the Vanderbilt Center for Better Health.  The site featured many flat and curved whiteboards on rollers, bookcases, tables, and other furniture, all reconfigured from session to session as needed. 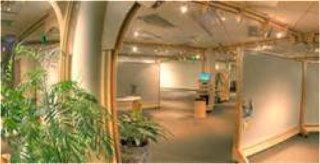 As each of us arrived, we were warmly greeted and photographed, then invited to breakfast at round tables.  There were large papers on the tables with squares for us to write things like our names.  In one square we drew ourselves using only five lines, and in another we wrote something unlikely that informed our spirituality, while one square remained intentionally blank.  I wrote “Samurai Jack” as a personal source. Staff gathered these papers and soon they all appeared posted on various boards around the room with the photo taken when we entered.  (I must say I didn’t weather the bad travel day well.)

Soon Fred Johnson, an ordained nondenominational minister with the World Fellowship International Church, summoned us to a central gathering place with drumming and song.

We sat facing a large curved whiteboard, probably about 30 feet long, with two large video monitors on either side.  As chief facilitator Rob Evans of Imaginal Labs explained what we were about to embark upon, artists using bright markers wrote words and phrases and drew images and other graphics reflecting Rob’s words and participants’ questions and answers, until they filled the entire board.  All the while everything was being filmed and everyone could see the writings on the board close up as the cameras zoomed in on sections and they appeared on the two video monitors.

Among the writings noted were:  the positives and negatives of models; must be aware of pitfalls of modeling, but models are necessary, serve a purpose, re-imagine how things can be different; Groundswell digital training for social change; importance of local congregation involvement in movements for social change; change starts from within; taking a stand allows perspective, and is different from taking a position; stand allows other positions to be heard; movement comes from taproot alignment; taking a stand includes perpetrator as well as victim; need to heal both.

Using the interactive and iterative Design Shop process, our time together consisted of three phases: Scan, Focus and Act.  Milestones for each phase are:

At the end of Scan Phase:

At the end of the Focus Phase:

At the end of the Act Phase:

Throughout the next days we broke up into about twelve groups meeting in “chat rooms” formed by reconfigured whiteboards.  Each chat room was named for a mountain – Kailash, Shasta, Uluru, Sinai, Fuji, Everest, Kilimanjaro, Table, Lookout, Machu Pichu, Everest, Ararat.  Prominently displayed on a little shelf at each whiteboard stood an iPad with the time on it: 30 minutes, counting down by seconds until the ends of each session.

In addition to the main meeting area and the various chat rooms, two prayer/meditation rooms, one for women and one for men, adjoined the main open room, with doors that could be closed.

We began in a chat room considered to be our “home community.”  This allowed us to talk with fewer people to begin to become acquainted with each other and to know our primary areas of interest.  We were given lists prepared by a design team of nine (Caitlin Breedlove, Carolyn Buck Luce, Rob Evans, Rev. Jacqueline Lewis, Rev. Michael-Ray Mathews, Rev. Alexia Salvatierra, Rev. John Vaughn, Ari Wallach, and Beth Zemsky), who decided on the particular composition of each group.  With each change of topic and purpose, we participants were provided with a paper indicating in which room we met and with whom; thus, groupings changed.

For our first chat rooms after we met with our home communities, we were free to choose from among the following:  Creating “Collective” Impact; SONG – Bridge-Building for the Long Term; Evangelical Immigration Table; Making Multi-Faith Work; Health Ecosystems The Soul of Money; Growing Your Digital Village Elder; Making Something Go Viral; Scaling Campaigns; Lessons from Faith Organizing for Marriage Equality; and Activating Millennials.  Although there were several I found compelling, I could only choose one, so I attended “Growing Your Digital Village Elder.”  Everything in this talk by Carolyn Buck Luce I found informative; however, the strongest and most helpful phrase used was “collaborative intelligence,” a form of understanding that arises from the interactivity that digital communication fosters.

There’s so much more to tell about this event.  I’m finding myself reviewing things in my mind and revising, expanding and gaining new insights as I digest the experience.  This is only the first of a series of blogs about MountainTop.  Stay tuned for more.
Posted by Broomstick Chronicles at 3:06 PM

I was reading your post and then it struck me that there are still so many mountains I haven't climbed. You helped me make an important decision I should have made a long time ago. Thanks!

Thank you for sharing your Mountain Top experience. I really enjoyed your notes and look forward to more. The comment about taking a stand and how a stand is not a position is a fascinating idea, one i intend to continue thinking about. All our communities are struggling with inclusion, change, you have given me food for thought.

My comment showed up with the name of a course I teach, my lack of attention to detail. My name is Michelle, I am a witch and pagan who firmly believes in academic rigor, well designed ritual, openness, an understanding of history and lore.