The activist Dominican Sisters of San Rafael, under the direction of Sister Marion Irvine, previously mentioned in this blog, observed International Day of Peace. The UN General Assembly, by Resolution 36/67 in 2001, declared September 21 to be an international day of peace.

We gathered near the Dominican peace pole on the amidst tall old trees and sunny patches of flowers on beautiful grounds of Dominican University on an utterly exquisite early Autumn day. The peace pole has the words "May peace prevail upon the earth [sic]" on each of its four sides in four languages: English, because we are an English-speaking society; French in honor of the birthplace of the Dominican order; Spanish for our neighbors to the South and many in our community; and Arabic because so much war is taking place in Arabic-speaking parts of the world. (These are the reasons Sister Marion gave.)

We opened with a call-and-response prayer that was printed in the program, as were all the prayers and songs. I wasn't comfortable saying some of the words -- it began, "We believe in God...We believe in Jesus Christ, who came to heal us, and to free us from...oppression..." -- so I didn't say them. The rest of the opening prayer was about human rights, solidarity of all peoples, justice, freedom from hunger and violence; I was down with that.

There was also a time for community sharing when we were asked to say what thought or feeling had brought us to the gathering. I said I was aggrieved at the needless and senseless deaths of our American children and Iraqis of all kinds that was taking place in Iraq. Sister Marion repeated each reason given, reinforcing it.

A procession around the university grounds preceded the re-dedication of the peace pole. Since Sister Marion had announced as an interfaith ceremony and invited MIC members to participate, I asked her if I could contribute a chant. It was that chant we used for the procession. I learned it from the EarthSpirit Community in Massachusetts, specifically from MotherTongue's new album, "Weaving the Web of Life." My understanding of the chant's genesis is that the woman who wrote it did so right after 9/11. Her heart was roiling, so the chant begins, "Peace in my heart," and extends to "peace between our hearts," ending with the all-embracing "peace in the heart of the world." (You can hear a bit of the chant here.) 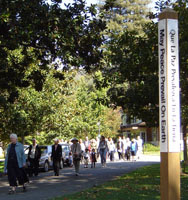 The procession.
I remained at the mike singing the chant while others walked, but I was told by several people after the conclusion of the ceremony that they kept the chant going the whole time and loved it.

After the re-dedication, the kindergarten and first grade students of St. Raphael School sang "He's Got the Whole World in His Hands," with gestures. They were adorable.

Although the ceremony was designed to honor all faiths in peace, and included three prayers in the program, all the prayers were from the Abrahamic traditions. They included "A Christian Prayer for Peace," "A Muslim Prayer for Peace," and "A Jewish Prayer for Peace." All were recited in unison by everyone there. I wonder if the sisters sought the prayers from those folks or if they chose them themselves. I was puzzled that they didn't have a Jew and a Muslim read the Jewish and Muslim prayers. In any event, I know they tried to be inclusive. I did introduce myself and say that the offering of a chant I had brought was from the NeoPagan community. Several people, including some of the nuns, came up to me afterwards and thanked me for bringing it. That felt good. It also felt good seeing and hearing all those people, especially the little children, chanting a Pagan chant. Not that there's anything that would peg it as having been written by a Pagan from a Pagan perspective, since in my view has universal appeal and applicability. That's exactly why I chose it and why I offered it. I want to see our face, or taste our flavor, in interfaith situations.

We concluded by offering personal blessings of peace upon those standing near us. I felt good about the whole affair.


Note: Photos are from Dominican Sisters website; more here.
Posted by Broomstick Chronicles at 11:18 AM