Sing a Song of Summer 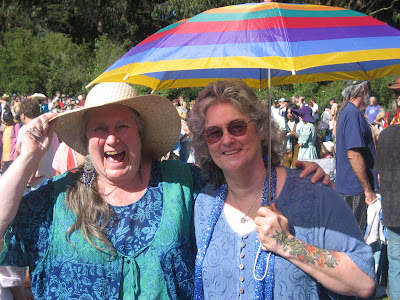 Summer & Macha at the Summer of Love
My friend Summer and I spent last Sunday afternoon in Speedway Meadows in Golden Gate Park enjoying a glorious day with thousands of others at the 40th Anniversary of the Summer of Love. We didn't know each other in 1967, although we were both in San Francisco. We met through the home birth movement in the '70s when Summer was a birth coach and we were both young mothers (well, not so young). Summer had a daughter and identical twin sons; I had Deirdre. Deirdre and her boys were both Geminis born in 1976.

Since then, we've tickled each other's funny bones, tipped a shot of Jameson's, celebrated birthdays and other good times. Summer inspires me to be a better person. It's not that she does or says anything in particular. It's just that when we have long talks, she gets me thinking about things in a more loving and compassionate way. Having Summer as a friend has enriched my life.

We arrived around 11:15 a.m. with folding chairs and table, rainbow umbrella and food. Every time we looked around the crowd was denser, with people streaming through the gaps in the trees on the paths down into the meadow. There were vendors and lots of good food to buy, but the lines were endless; we were glad we'd brought our own picnic. Here are a few more photos: 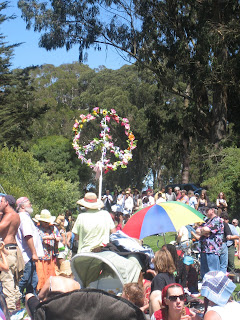 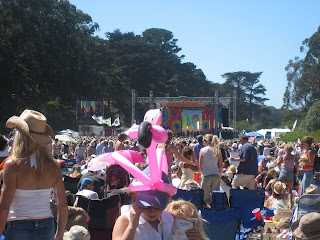 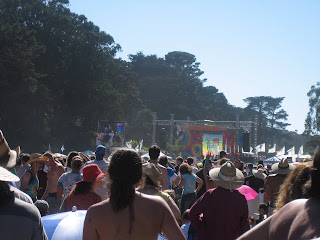 Believe it or not, that's Grace Slick and
the Jefferson Airplane up there on the stage.

Posted by Broomstick Chronicles at 5:05 PM

Does my soul good, it does. May there be many more Summers of Love and far fewer Winters of War. So mote it be.

That sounds like a wonderful celebration. Now that I've moved back out west, maybe next year I can get a grouping to head over for that. Also, great pictures and thank you for posting this.