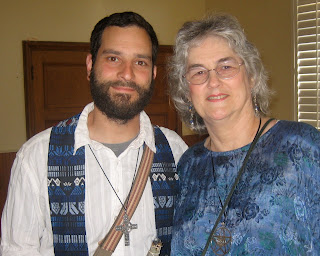 I've had a busy, eventful Summer, so where to start? Starting with the most recent, last Sunday afternoon, at the invitation of my friend the Rev. Paul Gaffney, I participated in the Marin Interfaith Street Chaplaincy 13th Annual Memorial Procession here in San Rafael. We gathered to the sounds of drums at Albert Park, where we were given flowers* and programs. A Buddhist colleague had set up a small altar there. We circled while he lit some incense and asked us to bow three times, once towards each other. 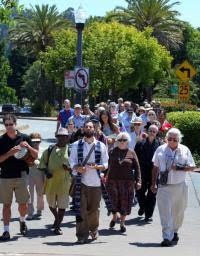 Following this blessing, we proceeded in silence up A Street to St. Raphael's Catholic Church, built on the site of the old Mission San Rafael Arcángel, the second northernmost mission established by Fra Junipero Serra in the early 1800s. There, right by the sidewalk, grows a Japanese maple planted in honor of those who've died homeless in Marin County. We placed our flowers around the base of the tree.

My friend Chris Highland, who preceded Paul Gaffney as the local chaplain to the homeless (and who now teaches at Cherry Hill Seminary), told me the story behind the planting. The folks at Green Gulch Farm (Zen Center) donated the tree to the homeless chaplaincy in 1999. Before the tree was planted, the homeless chaplaincy and their supporters pushed the tree in a wheelbarrow up and down all the streets of downtown San Rafael to awaken the more fortunate to the presence of their often unseen neighbors who had no homes. A plaque tells passers-by the meaning of the tree.

Father Paul Rossi welcomed us to St. Raphael's, after which all the names of those who died homeless in San Rafael were read and repeated. This list, which grows each year, only includes names of those whose names are known. It was printed on the back of the program. Following this reading, I offered a prayer "For One Who Has Died Violently or in Great Distress."**

While volunteers passed a collection plate around for donations to the homeless chaplaincy, I lead a round called "When We Are Gone," written by Anne Hill and Starhawk and printed in the program.

Paul then invited those assembled to share refreshments, conversation and music in the Kennedy Room of St. Raphael's. Food was donated by Trader Joe's.

I'm pleased that my contributions -- and this is the third time I've participated in this annual event -- are welcomed and valued. This shows us Pagans in a good light, as involved, caring citizens.

Here is a report from the local Marin Independent Journal newspaper on the event. Although it contains minor errors, it's view is positive.***

* Flowers generously donated by Burns Florist in San Rafael. Unfortunately, Burns will not be donating flowers again because, after having served the community for 100 years, they have become victims of the economic downturn and are closing.

** This prayer can be found in The Pagan Book of Living and Dying.

*** You can see me in one of the photos, about five or six rows back.

**** Photo of Paul Gaffney and me by Chris Highland. Photo of March from Marin IJ.
Posted by Broomstick Chronicles at 12:05 PM