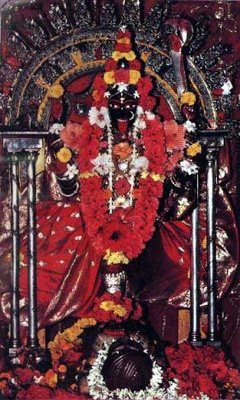 It's been way too long since I celebrated the New Moon by attending a Kali puja. Last night I did, and it was an exceptionally good one. There were eight musicians and three kirtan singers, taking turns. There were the man and woman who are always there, both of whom sing, while she plays harmonium and he plays tabla. Behind them a man played drone on tambura. Another harmonium player sang kirtans. The man who was with her played a long drone instrument that sounded kind of like a didjeridu but I don't think it was. It was about 5' long and painted with bright colors and sigils of some kind. I couldn't see close enough to figure out what they were. Then another man came and joined on his dumbek, while another woman played zils. The music was just great. The only other worshippers were the female pujari -- is that the proper term for a woman performing that role? -- and me. I clapped and chanted.

Ma drew me deep into Her image and we smiled. I just love her intense eyes and the cute way she sticks out Her tongue. (The primary image we use is a large color photograph of Kali from the Dakshineswar Temple in Kolkata/Calcutta/Kali's land.) She's made it clear that She wants me back as an active worshipper.

Was this in San Rafael? And I had to giggle when you said it's cute how She sticks Her tongue out! LOL

I worship Kali too so i understand that your experience was something special. Blessed be )O(

Nice! Kali is a homegirl (or at least the one I can rely on to kick me in the head when I'm being really stupid), and it's cool to read about other people smiling with her. That razzberry laugh has always told me "this is no big deal; get over it and do something worthwhile".