Last month I was fortunate to have been asked to give one of the keynote addresses at the Conference on Current Pagan Studies sponsored by the Religion Department of Claremont Graduate University in Claremont, Los Angeles County, Califoria. My talk, called "Out of the Broom Closet and into the World," ranged widely, but essentially addressed the underpinnings of Paganism, compared our current state with that of the early Christian movement, explained something of the interfaith movement, and suggested what we have to offer the world. For the first time ever I used a power point presentation to enhance my talk. It was easier than I thought and really helped illustrate some of the things I spoke of.

First out the gate, speaking on "Images of Individuation within the Feri Tradition," was my friend Jeffrey Albaugh; this was his first presentation. He was kept his cool while lots of technical adjustments were made in order to tape and broadcast the conference live.

Also early in the program William Blumberg, a student at Cherry Hill Seminary, read a paper on piety that resulted from his "Doing Thea/ology" course this fall. He also graciously suffered interruptions in his talk while technology had its way. He did a splendid job; I was so proud that he represented CHS.

Like all conferences, the papers were uneven, with more good and outstanding than weak.

One of the more scholarly papers was Galina Krasskova's "Performativity and the Development of Modern Heathen Culture."

I was delighted to get a short visit with Sabina Magliocco, who also presented a paper. I cannot imagine her ever doing a poor one; she always excels.

Saturday evening after the day's papers had been given I whipped up a simple ritual with the help of Jeff's grounding and drumming by Alfred Sureynam. Judging by the looks on people's faces, I think they left happy.

Among several fascinating papers, I found Misha Houser's talk about Pagans' political emergence, and her experiences as an "out" Pagan delegate from Southern California to the Democratic National Convention in Denver last Fall affirming of our maturity. 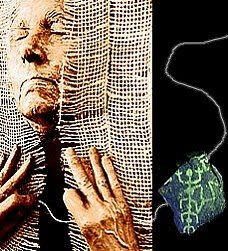 I was disappointed not to see Lauren Raine, who was scheduled to present "The Return of Spider Woman Community Ritual and Weaving a 'Webbed Aesthetic'." She had to cancel due to illness. Photo on right is one of Lauren's creations.

Helen Hye-Sook Hwang spoke on "Historicizing the Voice of Seeking Mago, the Great Goddess." Mago is a great goddess of East Asia.

Other provocative talks were:


Evidently CHS is gaining a better reputation every day, because three Ph.D.'s at this conference approached me about the possibility of teaching for us. What a morale boost that is!

I am grateful to Kahena and CSU for this opportunity.
Posted by Broomstick Chronicles at 11:14 PM

Great post. I am inspired that we are getting more and more positive news items and scholarship options.

Greetings, Macha! So much has "come a long way, Baby!". This is really wonderful. Thank you for keeping your CoGkin well informed. I am thrilled that major institutions of higher learning are opening to the universe again (university/universal
so that divergent thinking and learning remain choices.

You once asked if I would remove my computer from a bar stool so you could sit down. Gladly, gladly would I help you when possible. But please do not sit down too long. You are out front and showing the way!