WOW Besom Brigade performing at PantheaCon on Sunday, February 17, 2008, DoubleTree Hotel, San Jose, CA. This is only fewer than 30 seconds of a longer performance, but I feel lucky we got anything at all. I think the woman heard the commotion in the lobby and dashed towards it with her camera.

Here are two photos sent to me by Minnha, taken by her friend, Cynthia Larsen. 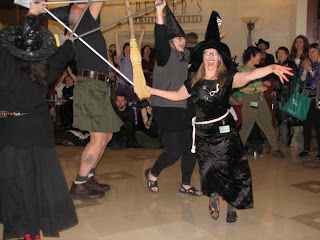 Here we are displaying our broom pentacle, except that
you can't see the star in this photo. Minnha flying towards
the viewer, followed by me in gray vest, then Toad. 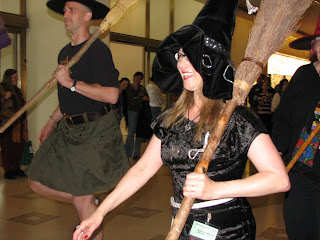 Toad and Minnha marching in formation.
I'm hoping other photographers will post or send photos. I know there were lots. (Gary M?)

An odd thing about the besom brigade: I would think doing this would appeal to any able-bodied Witch with a sense of humor, one who doesn't take herself too seriously. Even so, we attract few, if any, younger folks, and seem to be comprised of grey-haired women and gay men. Minnha is an exception. Malendia, who practiced with us but couldn't be there for our performance, is also an exception. Michele Mueller and a few other younger women have marched with us occasionally. But overall, we tend to be hags and fags. And, boy, do we have fun!
Posted by Broomstick Chronicles at 1:42 AM

Looks like fun! You pose an interesting question--why is our "community," such as it, mostly "fags and hags?" It's a generalization, yes, but it has some truth. Maybe it's because younger folks are simply too distracted with working, marrying and such to look deeper? Are they too afraid of being outside the mainstream just yet?

Whatever the reason, I think us "fags and hags" are strong people, with a true sense of ourselves, finally unafraid, unashamed and thrilled to be alive in this world. Unfortunately, I don't believe most people can say that.

Oh that looks like fun! If I didn't live so far away I'd definitely join you.

I've never been able to make it to PCon, but I would so be doing that if I were there. I think it's awesome.

I would gladly lift my besom with you all, but sadly i am not close enough.
Of course I am not sure if at 38 I qualify as young; or am I at that quasi middle age stage?

Ah, well as an unreconstructed fag-hag I'd be right there with you :)

I was so sorry to miss the Besom Brigade!

Looking forward to the video, and joining in next time.

Dancing with brooms, what better?