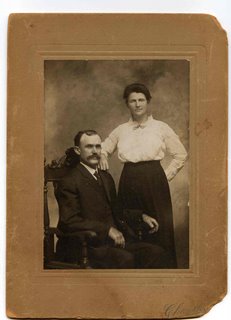 This is a photo of my paternal Irish grandparents. I never knew my grandfather, Edward Joseph O'Brien, because he died before I was born. He was born into an Irish immigrant farm family in Moorestown, New Jersey.

My grandmother, whom we called Mom-Mom, was Kate Reilly from Ballinasloe, Co. Galway, Ireland. An orphan taken in with her siblings after her parents' deaths by her mother's sister Una, who already had a houseful of kids to feed, Mom-Mom came to Moorestown when she was about 19 or 20 under the sponsorship of a loving Quaker family. She served in their household until she worked off the cost of her passage.

Her sisters and brothers went to Philadelphia and Pittsburgh, PA, and to Australia. Kate married Ed and together they had nine children, six girls and three boys. My father was the second boy, but one of the youngest children, just before John and Catherine, both of whom had bright red hair and freckles. My dad took after the black Irish side, with that light creamy skin and dark hair and eyes.

Although Mom--Mom was old and wrinkly and frail when I knew her, I always felt close to her and felt I resembled her a bit. She grew up speaking Gaelic. I often asked her to teach me, but she never did. They were nice Roman Catholics who probably preferred to assimilate.

What is remembered lives!
Posted by Broomstick Chronicles at 2:23 PM

My mother's maiden name is Clancy, and her father grew up in County Cork on a farm, poor as the night is long. He entered the Merchant Marines and met my grandmother, a spicy Italian woman born to Calabrian immigrants, when he was recovering from injuries sustained in a drunken brawl.

Thanks for the peek into your lineage.