Mighty Dead of the Craft 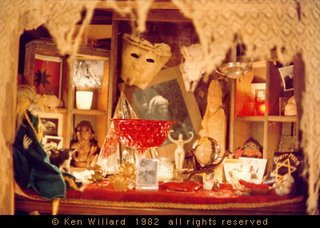 This photo is a detail from an altar to the Dead created by the late Judy Foster and crew in 1982.

As I move into a time of remembering the Beloved Dead, I realize that today is the birthday of my late husband, my daughter's father, Rod Wolfer. He was born in '33 and died on 11/22/88 (anniversary of the deaths of both JFK and Aldous Huxley in 1963) so had he lived, he'd be 71 today. As we often say, "What is remembered lives."

Here's a seasonal suggestion, something I wrote in 2001 for Witchvox called "The Mighty Dead, the Beloved Dead and Us." Caveat: Ruminations on such elusive and subjective topics are always undergoing revisions. Food for thought this darkening season.
Posted by Broomstick Chronicles at 3:53 PM