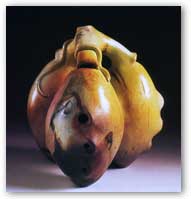 Last week I attended a workshop given by Hospice of Marin for "Marin clergy and spiritual leaders," meaning I got the invitation by way of the Marin Interfaith Council. Hospice of Marin is the oldest hospice on the West Coast and second oldest in the country, to Connecticut. They must have a good source of funding because they recently moved into some mighty fancy digs. They outgrew their former building.

What a caring, dedicated group they are! I've met some of the hospice workers at MIC events. I've always considered people who do that work to be saints, or at least 'saintly,' even though we Pagans don't exactly have such a category of mortals. In any case, besides hospice care, MIC provides grief counseling and offers educational programs, like the one I'm writing about, to the communities they serve. They've expanded to serve Sonoma County, San Francisco County and part of San Mateo County.

The workshop included a presentation by Kathy Speas, a member of the Threshold Choir, a group of women who sing at the bedsides of dying people. (For some reason their website is down; I provide this link in case it's fixed by the time you read this. If it's not, you can read more here.) The Threshold Choir itself is about 15 women, but only two or three go to individuals; more could create too much commotion in a place where a peaceful atmosphere is best. They have some CDs available for purchase.

Another group that ministers to the dying through music is the Chalice of Repose: The Voice of Music-Thanatology.* Based in Missoula, Montana, but having centers in various cities around the world, Chalice of Repose offers harp music for the dying.

My friend Evergreen Erb, a Reclaiming Witch in Vermont, also does harp therapy to aid healing and to ease dying. She's a member of the International Harp Therapy Program; her magical harp can also be heard on some Reclaiming CDs.

The other speaker at the workshop was Maryliz Smith. (Her website does not appear to be working either.) Maryliz commutes from Marin County to Vancouver to work with cancer patients at the Callanish Healing Retreats Society; her bio is here. She played for us a triple ocarina. Ocarinas have been around for 12,000 years nearly everywhere humans have lived, but this was the first triple one I'd seen. One chamber plays a drone while the other two can be played by opening and closing the finger holes. At first I thought the sound was celestial, but as I listened I realized that it had the sound of wind in caves. I pictured Hekate leading Odysseus down into Hades, hearing the songs of shades in the darkness. The sound is engendered by the element Air resonating inside the clay of Earth. I want one! So far, the least expensive one I've found is $350, so if one comes into my possession, it ain't gonna happen anytime soon.

During the socializing at lunch, several of the people (one man, maybe eight or nine women) expressed frustration with their choir directors, pastors and rabbis because they'd found them to be inflexible about what music was appropriate to play for funerals and memorials. These women felt that using music that was meaningful to the deceased and her or his loved ones was important, even if traditional liturgical music were part of the ritual. Too frequently they'd met with opposition to this from those they'd most expected to want to care and help.

I could only nod my head, thinking of how creative we Pagans are when it comes to any kind of rite of passage. We are free to use what works best for us, regardless of whether it's considered secular or sacred. In my opinion, using secular music in a sacred manner sanctifies it. Nearly every day I'm reminded how great it is to be Pagan.

* Thanatology is "the scientific study of death and the practices associated with it, including the study of the needs of the terminally ill and their families."
Posted by Broomstick Chronicles at 12:34 PM

Not sure this is about pagan v. other religions. I don't know about pastors, but with rabbis, it completely depends on the rabbi. The rabbis at Temple Micah are completely open to personalizing any kind of service including funerals of course. (A couple of weeks ago we sang one of the Shabbat prayers to the tune of "Summertime" because the weather was so hot. The Hebrew worked perfectly to the tune. It was almost eery how perfect it was.

When I die I hope the Kaddish is sung for me exactly as it has been sung at Jewish funerals for many generations. I like the idea I will cross over to the same words and music as my ancestors. But I'm in all in favor of contemporizing ritual, too, if that's what everyone wants. I'm certain I'm not the only non Pagan who feels that way.