What and Who Is a “Solitary” Witch? 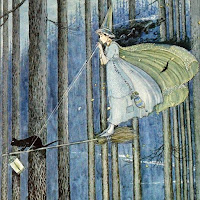 I’m a bit of a geek about Pagan identity and solidarity.  I hold to the fact that we must define ourselves lest scholars and journalists do it for us and we disagree with how they’ve done that defining.

For some years the designation of “solitary” practitioner of the Craft has bothered me.  Not because it’s not valid; it is.  Rather because it overlooks other Witches who work neither in a coven nor alone.  (I’m talking about Witches here, not any other manifestation of Paganism.)

I’ve been a member of the Covenant of the Goddess (CoG) since 1981.[1]  When I joined, I was part of Holy Terrors coven.  However, like anything else, covens have life spans, and some are longer than others.  When I left that coven, which eventually dissolved, I maintained by CoG membership, except that I had to change my membership type to “solitary.”

There were good reasons for CoG to have that category of membership when it was founded in 1975 – another era entirely when it comes to Craft and Paganism in general!  Some Witches are self-initiated, which I recognize as valid.  Some really do prefer to work alone.

Then when it comes to surveys of Pagans, we may be given dozens of identifications from which to choose, and one of them is “solitary.”  My point in writing this is to expand our thinking about Witchen identity and those who practice it.

I maintain my membership in CoG under the designation “solitary” because that’s the only option other than coven member.  However, I am not a solitary practitioner.  I rarely work alone.  Further, I suspect others called solitaries are not necessarily Witches who work alone.  The term I’ve settled on for now for Witches like me who belong to no group in particular but who work, make magic, and celebrate the sabbats with others is “floater.”  (I suppose we could call ourselves “besom flyers.”)

Here are some of the reasons people call themselves “solitary” Witches:

«    The Witch is between working groups.  She[2] may have belonged to a coven or covens in the past.  She may have left for any number of reasons, or the coven itself may have dissolved, having lived out its lifespan.  Her preference is to work within a coven, but she isn’t doing so at the moment.

«    The Witch has been seeking another coven, but hasn’t yet found the right one, the one best suited to her proclivities, interests, and social skills.  Being temporarily covenless, she is a “solitary.”

«    The Witch has experimented with circles and other groups, such as a CUUPS congregation, yet has not chosen to commit to a coven, per se, or to a tradition.

«    The Witch is deep in the broom closet, wary of revealing her religion to others.  This may be because she lives in a place where she feels she would be vulnerable to the disapproval of others in her neighborhood, school, workplace. or other social grouping.  Whether this is a realistic assumption on her part is not my place to decide; however, we do have a Constitution, the First Amendment of which guarantees religious freedom in this country.  In the day-to-day lives of some, in some regions of the country and in some communities, conformity with the dominant religions in that area and intolerance of different expressions of spirituality and religion are the norms.  When such is the case, how can one be expected to find other Witches?  Of course, the existence of the Internet has opened up possibilities for the unaffiliated

«    The Witch has been declined admission to one or more groups or has been kicked out, for whatever reason(s).

«    The Witch works with various groups here and there, depending upon the purpose of the ritual and the circumstances.   Hence, she is a “floater” or “besom flyer.”

I celebrate the sabbats with an individual coven or other circle, or with a tradition in a rituals performed for the public.

If I have some particular personal ritual I need or want to perform, I can always find collaborators from among my Witchen friends.  One example of this is when I created a ritual for a daughter recently released from rehab.  I designed this rite using the story of the return of Persephone from the Underworld and back into the arms of her mother Demeter.  In attendance were the mother and sister of the young woman as well as some of her close friends.  Each left with a novena candle bearing an image of Persephone that was consecrated in the ritual and taken home to be fired up if and when ‘Persephone’ felt she needed extra support and reinforcement

A related question is whether a “solitary” can be a leader.  The answer is a resounding yes.  Obviously one who works alone has no coven to lead.  Nevertheless, leaders seem to emerge when there’s a need regardless of formal membership in any organization, or even affiliation of any kind.

Par exemplum, I can name other Witches who lead, and cite examples.  However, the examples I know best come from my own life so I’ll offer a few.

In my case, I’m a leader in the sense that I have led, and sometimes still do, yet I am not leading a group of any kind.  I design and perform marriages, seinings, menarche rites, memorials, house blessings, partings/divorces, adoptions, and other rituals for Witches, Pagans, and others.  As mentioned above, I can always round up collaborators.  Below find three examples of different kinds of leading without a group.

«    For the most recent Parliament of the World’s Religions in Salt Lake City last October, I produced a quite substantial performance ritual using glorious masks of different goddesses created by Lauren Raine.  This undertaking required skilled priestesses from many places around the U.S. and beyond; 13 wore masks, three narrator/storytellers, singers and musicians, technical work, and other support people.

«    I frequently participate in interfaith activities in which I’m viewed as an authority on my religion.  In such cases, I have to emphasize our diversity, the fact that we have no sacred text containing our “laws,” and that I can only speak for myself.  I offer to seek out representatives of specific Pagan religions (a Druid, for instance) whom they may query.

«    Third and most significant, last summer I performed an initiation of a young man I’ve been working with for the past four years.  Although I am currently unaffiliated with any particular tradition, I remain oath-bound to my sisters and brothers of the art.  The time had come for this person to take that step, too.  So I recruited two other priestesses of various traditions (Order of the Temple of Astarte in LA in 1970s; Feraferia [not specifically Craft]; TOTEG [Temple of the Elder Gods]; Reclaiming; Faery/Feri; Gardnerian; CAW [Church of All Worlds]).[3]  In addition to the pre-initiation challenge(s) I gave him, I solicited from each of my collaborators a challenge for him to complete before the rite.  Then I designed a ritual of initiation that I wanted, and performed it.  He doesn’t really have an affiliation or membership in what we would call a tradition, per se, but he is the first of what I am calling the “NightMare Line.”  I feel really good about that, and so did everyone else involved.  But, hey, I’m a ‘solitary.’  :-)

So I guess I, and other Witches in similar situations or of similar temperaments, don’t really fit more standard descriptions.  I leave it to the reader to decide if this qualifies as leadership -- at least until the Pagan world changes from what it is now, and, as we say, “She changes everything She touches, and everything She touches changes.”

(Thanks to Gwendolyn Reese for the prompt to explore this topic.)
[1]           CoG has confronted changes within the Craft and within various social and political realities that did not exist when it was founded, with various degrees of awkwardness and some success.  This writing is not about CoG.

[2]           I’m using the singular pronoun for females because that’s what I am and it’s easier.  Reader can translate as she feels necessary.

For someone who's been around for a while and has done a lot of things,'solitary' doesn't really fit. I'd think 'Elder', because that doesn't imply working with a group or not, but as being available to be consulted and to step into leading or supporting roles fluidly when there is need.

Thanks for sharing this -- and congratulations on inaugurating the NightMare Line!

... with thanks to Amaterasu for the last time we met.

I don't know what you should call yourself... (maybe unaffiliated?), but it's nice that you feel the calling to serve. A communal ritual has many benefits that solitary practice does not offer (and vise-versa.) One beauty of being a self-described solitaire is that it is undefined, so I think anyone who wants to call themselves a solitaire should be addressed as such. Also very nice not to have to pay a membership fee. :)

Since 1994 I've called myself a "Sovereign High Priestess of the tradition of Heartsong". I'm Heartsong. I'm Sovereign of Me. That's my facetious way of calling myself a "solitary". When I use the word "solitary" I usually say I'm a solitary among community that sometimes takes on leadership when Called to. I like your version, too! :)

I used “elder” but I wasn’t comfortable with it. I fit Samuel Wagar’s definition very well, but others often thought I was presumptuous. I used “Priestess” as a verb, I was a crone for those seeking my help, but my public persona was the Elder.

Great post. I began identifying as a Witch about ten years prior to joining a coven. I spent very little of that time practicing exclusively alone. I went to local public rituals, practiced with other solitaries, etc. It's only since I moved to Australia in 2012 that I found myself without community and am now a solitary Witch, but even that changes when I visit the US. And congrats on the NightMare Line!