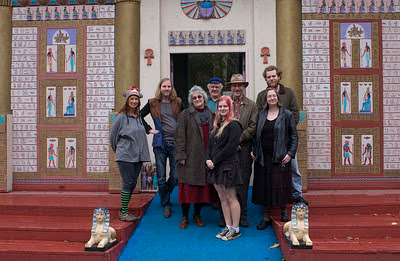 On the Friday before the meetings got into full swing, a caravan of eight (Chas Clifton of Colorado; Egil Asprem, a Norwegian student living in Amsterdam; Mary Hamner, a student from NC; Christine Kraemer of Boston; her friend Nick; Timothy Miller, a professor at the Univ. of Kansas; charioteer Julie O'Ryan; and me) took a field trip through Marin and Sonoma Counties, passing near to many significant places (Druid Heights, Sausalito houseboats, Olompali) on our pilgrimages to three sites.

After picking up Raina Woolfolk O'Ryan-Kelly in Rio Nido, we drove to Isis Oasis in Geyserville, home of Loreon Vigné and her many exotic cats, brilliantly plumaged birds, and other animals.  The weather was damp and gloomy, so after we toured the temples, studio, lodge, and the rest of the retreat center, we gathered in the toasty dining room to share tea and some tasty "occu-pie" the folks at Isis Oasis had made and brought to the locals at Occupy Geyserville.  I bought Loreon's latest book, Lots and Lots of Ocelots.  Loreon is one of the few individuals who has successfully bred ocelots in captivity.  She has also bred servals.  Both ocelots and servals are gorgeous, precious animals whose population is threatened by the encroachment of humans into their native habitats. 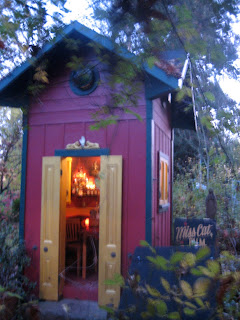 After a lunch which took nearly an hour to be served, we drove on up to visit Cat Yronwood and Nagasiva at the Lucky Mojo Curio Co., where Julie's son and Raina's husband, Aidan, works.  I took a few photos that weren't that good, but others took more that I hope to see soon and post when I acquire permission to do so.  In the meantime, here are two shots of Cat's reading room and an altar inside. 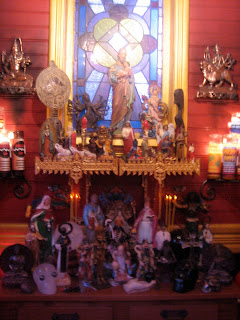 By this time some of us were late for appointments in San Francisco; however, instead of returning, we proceeded to the home of Morning Glory Zell-Ravenheart to view her spectacular collection of goddess images.  We weren't able to stay long and really immerse ourselves in her collection and hear all her many stories.  Another time, I hope.
~~~~~~~
Forgive me, readers.  I had this post looking good, only to discover I'd inadvertently posted it to the California Corrections Crisis blog.  I got all messed up trying to move it to the Broomstick Chronicles.
Posted by Broomstick Chronicles at 7:35 PM

Having taken the train home, where I was trying to sleep off a world-class San Francisco cold, I am late to blogging that tour, but here is my first installment.