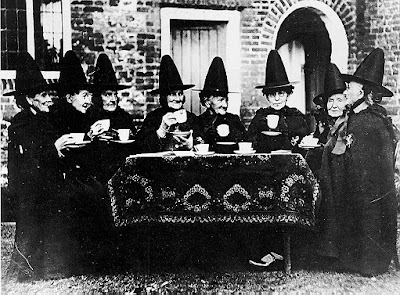 I began exploring the notion of Pagan elders about 15 years ago when the then-editor of The Green Egg asked me to write an article. I'm pleased to say that the article made it into the Green Egg Omelette, an anthology of the best of GE over the years.

In the Fall of 2010 I created a survey on Pagan attitudes about elders on Survey Monkey. Between then and January 2011, 627 Pagans responded to that survey. I allowed plenty of room for comments. This volume of responses allows us to begin to assess how Pagans feel about this subject.

I come to this subject from personal motivations.

As Carol Christ has said, and as I have often repeated – and I paraphrase -- it’s not enough to reject the ways we have been given if we find them unsuited to who we find ourselves to be, because in times of stress we will turn back to those ways. Rather, we need to create effective alternatives. That was one of the motivations for our writing The Pagan Book of Living and Dying, and it is my motivation in exploring the notion of Pagan elders.

I believe that in order for a community to be sustained, it must include the full spectrum of ages, from the ancestors to the unborn. In between, babies, children, youth, young adults, parents, and elders. Elders may simply be older members of a community. Or there may be an acknowledged group of individuals who play a more formal role in community life.

We Pagans often speak of ourselves as belonging to a tribe, and in the broadest sense I feel that way, too. But we are not like the tribes of our Native American contemporaries or of our (mostly) European, African and Asian ancestors. Pagan groupings are not like the clans of the Celts or the tribes along the Rhine; not like the villagers in Tuscany or Malta. We lack a common familial ethnicity, mores, lore, culture, foods, songs. We contemporary Pagans do, of course, share lore, music, customs, and a language, but not nearly to the degree that tribes do.

We arose primarily from the counter-culture. We were seeking meaning and connection in a rapidly modernizing, culturally diverse, and frequently socially fragmented world. In essence, we sought a tribal identity. And we found it -- only the state in which our tribes find themselves is inchoate, rudimentary, immature, not fully formed. We lack the cohesion of a tribe.

If a tribe is

a social division in a traditional society consisting of families or communities linked by social, economic, religious, or blood ties, with a common culture and dialect, typically having a recognized leader : indigenous Indian tribes | the Celtic tribes of Europe.

then you can see that we are missing several characteristics of tribe, while others exist in a rudimentary form.

When I was “coming up” as a Witch in the San Francisco Bay Area in the 1970s and ‘80s, there were few real distinctions made among traditions and few elders. We were all Witches. Some of us were Faery Witches, some NROOGD, Garderians, Alexandrian, Georgian, Majestyc, Tower Family, and plenty of unspecified. The only “elders” of which I was aware were Victor and Cora Anderson (Faery, now spelled Feri) and Grandma Julie of the Tower Family.[1]

In my particular case, I had been doing ritual and magic with a coven, Holy Terrors, and a larger, more public group, Reclaiming Collective, until after some years this particular style of Craft grew to become a tradition in its own right, called Reclaiming.[2]

Well, a few years down the line and matters began to arise that called for the involvement of what, for want of a better term, one might call “elder.” As a member of CoG who met the criteria CoG sets for the issuance of Elder credentials, to wit: “capable of perpetuating the tradition,” I have long held CoG Elder credentials. I officiated at weddings, memorials, baby blessings, etc. I think this criterion is a valid one, but it leaves the matter of what knowledge, skills, and characteristics an elder must have up to the covens and traditions, since CoG is primarily a federation of covens rather than individuals.

I never felt I had anywhere to look, anyone to consult, when difficult community matters arose, not to mention when I had questions about my own psycho-spiritual experiences encountered during the development of my personal and group practice of Craft.

What happened was that I gradually accrued a circle of friends, a series of friendships, with co-religionists I liked, respected, and admired. They were not necessarily from within my own tradition, although frequently they were. Most were active in other Pagan communities, so they had a similar set of experiences upon which to reflect and proffer conclusions, yet were not directly involved with some of the things about which I sought counsel.

These same individuals reciprocally consulted me about matters in their own communities.

For the most part, that practice has worked well. But it’s not appropriate for many matters. For instance, when someone within one’s community (using the term “community” very loosely) feels an injustice has been done, or that someone else has behaved in an inappropriate manner in the context of community work. In the case of Reclaiming, that might be about something someone did or that happened at a WitchCamp or in a class or public ritual.

One of our attempts at addressing such issues is to have a “listening circle. This is especially helpful if there are two or more parties to a dispute and only one of them wants to resolve it. There is, or at least has been, no way to compel anyone to come parley. Yet if there remains someone who feels dissed, unheard, disrespected, or in some other way offended or transgressed upon, I do not think it’s helpful to disregard that person’s, or those people’s, grievance. In such cases, the aggrieved party seeks out others from within the trad whom she sees as fair, and asks them to sit in a listening circle. Those sought out are always people who have been part of the particular tradition for a long time, often since its beginning. I am unaware of any young people having been asked to serve in a listening circle. All of which is not to say that those sitting in the circle are Elders, per se.

These listeners usually reflect back to the offended what they hear, and perhaps offer suggestions of either coping or eventual resolution.

Listening circles do not have the authority of something like a panel of judges.

How do we assure accountability for one’s actions within a trad? Is this a function of elders?

There is also the option of mediation if both parties to a dispute wish to resolve it. In that case, an outside professional may be hired. Alternatively, a group of three to five specially selected “elders” might sit in discussion. Discussion usually opens with some informal ritual, lighting a candle, setting or creating sacred space – such a conference may be done in the context of a sacred circle – or with a prayer or solicitation to a particular deity.

This whole question of Pagan elders is an open one, and will remain so for years as we grow our communities and work to keep them healthy. I have suggested some of the criteria that's been used, or might be used.

The elephant in the living room is what happens to Pagans when they grow old and less able to care for themselves. Should we consider gathering funds for their care as many communities do? Should we begin establishing homes or retreats or other places where we can house our elders in comfort as well as assuring them space at our gatherings and in our homes?

Although this is a subject for another blog, and much, much more discussion, I believe, as I said early on in this blog, that if our communities are to survive and thrive, we need to address the notion of elders, both as a precious resource that can contribute and enrich our lives, and as a group we need to assist as they age.

[1] Today there are several lines of Faery and at least two lines of Tower Family.

[2] Some consider Reclaiming to be a line of Faery/Feri.

Posted by Broomstick Chronicles at 1:19 PM

Thank you for opening this discussion, Macha. You raise some very important issues. I'll speak to just one of them..

As a once-upon-a-time social services director in a 152 bed skilled nursing facility for the elderly, I have always felt the reality of late-life issues pressing in on a culture that would rather be in denial.

I would have hoped that Pagans of all stripes would not have been in the same boat.

I have seen first hand how such matters can be handled wisely by community, or ignored to the immense loss, not only of the elderly, but the community who would have benefited from continuing to contact and care for them.

These matters are most definitely coming up for us, and we ignore them at great peril, not only to the individuals impacted, but to the ultimate viability of neo-Pagan traditions to survive and thrive across future generations.

I hope this will spark some additional discussion and (better) resolution to action.