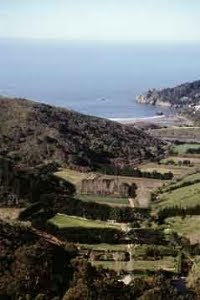 Last Monday I attended Marin Interfaith Council's only retreat of this year, at Green Gulch Farm, shown in this photo and scene of other retreats I've mentioned here. The day was sunny and gorgeous. Proceeding without a specific theme, the two teachers offered a variety of commentary.

Sheikh Jamal Granick, raised Roman Catholic in the Bronx, now practices Sufi Muslim and is associated with the International Association of Sufism, founded by one of his teachers and one of my colleagues in MIC, Dr. Nahid Angha. He works as a psychotherapist.[1]

Sheikh Jamal's co-teacher was the Rev. Arlene Lueck of the host Zen center. She, too, was brought up in a Roman Catholic family. After a life as a wife, mother, and high-powered businesswoman, she visited a monastery around the time she was divorcing, and stayed. She had entered with no intention of seeking a religious life. She is now tanto, or practice leader and mentor, of Green Gulch Retreat Center.

Jamal began by saying that "practice is implementation of faith, otherwise it is just belief." As someone for whom faith is minor to non-existent, and who relies upon experience over belief, this statement doesn't quite apply. That said, I guess you could consider it to be walking one's talk, a practice I admire and try to do.

Arlene said that Zen is about breath. It is above and beyond any "ism." It is about not attaching, letting it be, but not a free-for-all. She says nothing is an absolute, that meditation leads the voice, and that "not knowing" is most intimate. "Buddha" means awakened mind.

They compared the concept known in Sufi as "primordial nature" with that known in Zen as "original mind."[2]

We sat in silence for maybe a hour, after which the teachers opened the floor to questions. Jamal explained that there are many orders of Sufi and many kinds of dancing. The dervishes originated with Rumi, a Persian in Turkey. Rumi was in mourning, so he began to move, and out of that movement came dance and then poetry.

Arlene claims that sacred sound, sacred dancing, and sacred silence are all the same, forms of "deep listening." She said that all of us were there because we had "ecumenical minds." 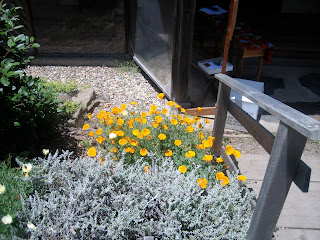 Because he is a psychotherapist, Jamal was asked to speak of the difference between religious practice and psychotherapy. He said our acquired personality is what we learn from the senses, and that ours sense of self is derived from reflections from our environments. On the matter of transference/projection, he claims that a good teacher will not accept transference, it won't "take." Again the teacher is the mirror of the student. This was a timely thing for me to hear.

In Pagan circles, I sometimes encounter those who use their time working together as a form of therapy, and I don't think this is the purpose of circle work. I know that ritual work can be very therapeutic, and I think it's great to use it that way. Gods know I've used ritual and magic as a form of personal therapy. But to use the circle mainly for the deep down and dirty work of therapy does not, in my opinion, honor our gods. If we need therapy, we can seek out a competent therapist or group. Then we can fortify the work we do in therapy with our magic. But I am uncomfortable using circle work as a primary method of therapy. Of course, I know there are plenty of covens who don't do this.

We shared a scrumptious vegetarian lunch lovingly prepared with fresh vegetables grown right there by people staying, learning, and serving at the retreat. Some of us ate in silence, while those who wished to converse ate in another section of the dining room.

Both teachers spoke a bit about how their organizations were structured. Both of their religious organizations are relatively young groups within much older religious traditions, and both were founded in the U.S. Women play a prominent role in both. Arlene said that she's observed in older Japanese Zen orders an openness to the active participation of women that they didn't have before their interactions with American orders. I think you can say this about Craft, to some extent. Women are more prominent in Witchcraft in America than in Europe, and I'm hoping that the "backcrossing"[3] has a similar effect in Craft in Europe to the effect it's had in Zen in Japan. In most other American Pagan religions women seem to have parity with men.

The Zen group was founded by Americans coming out of the counter-culture of the 1960s and '70s, as has American Paganism. Most of those who created the Zen center came from middle-class backgrounds, relatively privileged and well educated, just like much of the Pagan population. They had no experience with organizing a religious group, much less a Utopian community where they all had to live together in harmony. They have their internal disputes, things they have to confront and work out. They are human.

As these two teachers described the structure of their respective organizations, I couldn't help but reflect upon my experiences with Pagan organizations. There are a few Pagan groups in the U.S. who own property communally and live on it together, often gaining their livelihoods from some kind of shared business or farming endeavor. I have never been drawn to be a part of them. However, I've involved myself in other efforts at Pagan organizing (Reclaiming, CoG), and currently work at making an accredited Pagan seminary. (Cherry Hill Seminary: Distance Education for Professional Pagan Ministry; please consider making a donation to support our work.)

Jamal claims that no group has authority in Sufi, that authority comes from within. This notion comports with my own position as a Pagan. As an example, he said that if when you're thirsty and someone offers you water to quench your thirst, you're more likely to follow that person to the source of more water. But if someone just tells you about a source of water, well, so what? Perhaps this is the difference between care and kind acts on the one hand and preaching on the other. We Pagans tend to dislike being preached to (although I personally really appreciate a good orator like our President).

Arlene says that Zen has no greeters; you find your own way in. This is how I've always understood Craft. One of its appeals to me was the fact that you had to do a little searching to find it. This made the finding all the more precious. That is not the case anymore. We have become much more visible in the past 15 years or so. I don't mind the visibility so much, although I know plenty of Witches who prefer to stay deep within the broom closet. What I do mind, though, is what sometimes seems almost like commodification of Craft. Sometimes I see streaks of proselytization that make me very uncomfortable.

Arlene told of how each person makes his or her own rakasu (rakusu), stitching it as I would a quilt, as a meditative act. A rakusu is a bib, the color of which indicates the wearer's position in the order. Teachers wear brown or gold rakasu. One must have achieved a certain level of teaching in order to wear a rakasu. They are worn for a ceremony of receiving Bodhisattva Precepts. 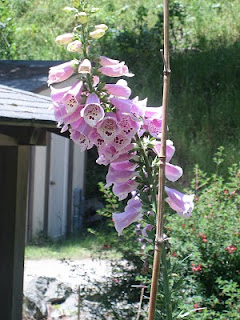 Arlene, in her early 60s, reflected on the fact that she realizes that she has reached the last part of her life. Me, too, only I'm a bit older. She said it's a time of life when you don't take life too seriously, but you do treat it seriously. I like that.

She claims that boddhisattvas equate to Catholic saints, something that I, and probably other Pagans, have been noting for years, particularly when discussing theology, a monotheistic concept in the first place.

We concluded the day with a walking meditation. Arlene showed a specific way of holding the hands if we wanted to. We were to walk with our gaze down, looking at nothing and being aware of everything.

I have attended nearly all of the retreat days MIC has offered. Some turn out to be nice days in nice company, being quiet. Others give evidence of attitudes that annoy me. I nearly always gain some insights, usually unexpected.


Note on photos: The bed of bright orange California poppies grows just to the left of the entrance to the zendo. The foxglove grows near the restrooms.

[1] Interestingly, one of the co-leaders of MIC's retreat last Winter was a Philadelphia-born, Catholic-raised Sufi Muslim college professor.

[2] I realize that many Pagans are knowledgeable about Zen and Sufi beliefs and practices. I think that, in general, contemporary Pagans are more familiar with other religions than the practitioners of those other religions are about each other, let alone Paganism. One of the fun things about doing interfaith work is finding your commonalities.

[3] "Backcrossing" is a term used in animal breeding when a domestic animal is bred with a wild animal of the same species. (Not being a breeder myself, I'm no doubt oversimplifying.)

Posted by Broomstick Chronicles at 12:39 AM