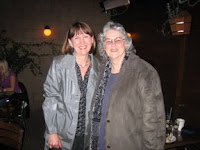 As we chatted it up at Chow in the Castro, it was as though there had been no intervening 38 years. After dinner, we drove around and reoriented ourselves, especially Peggy, who hadn't been in San Francisco in all that time. Peggy's a retired college professor and writer of mystery novels. I'm eager to read her latest, Sweet Man Is Gone.
Posted by Broomstick Chronicles at 11:13 AM