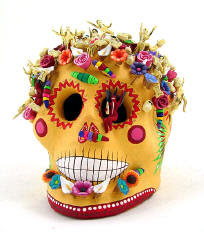 By Mexican artist José Luís Serrano,
permission to use pending.
"This is the Feast of Samhain, when the veil is thin that divides the worlds, the seen from the unseen, the day-to-day from the mysteries. ..."

I've been so wrapped up in celebrating this, my favorite sabbat, in ritual, I've had no time to tend to this blog.*

A week ago Sunday afternoon some Witchen friends and I sat at the big table in Victoria's loft making El Dia de Los Muertos candles. This was a year for deceased men in my life. I made one for John Patrick McClimans, my brother Jimmie O'Brien, my dad James T. O'Brien, and my late husband Rod Wolfer. Victoria has taken some fine photos of the altar in her shared yard, but she's been so wrapped up in her demanding new job that she's disappeared from the Pagan blogosphere for a time. I'm happy with the way they came out.

My brother Jimmie at about age 20,
shortly after the accident in which
he lost his left arm and his right leg.
You can see that his right ear has
not been entirely reconstructed with
plastic surgery yet. 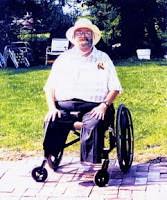 My friend John Patrick. As you can
see, he had lost his legs when this photo
was taken. It's not very high resolution
because this is a color photocopy of a
photo which was then scanned and
saved as a jpg to put on the candle.
Friday night some Dianic friends graciously included me in their Samhain rites, also in Victoria's loft.

Saturday night I proclaimed the feast at Reclaiming's 28th annual Spiral Dance ritual** in San Francisco. I went with my friends Michael York and his partner Richard, who were virgins to this experience. I told them they would love the spiral dance (meaning the dance itself, not necessarily the whole ritual), and they did. Michael's knees were hurting so I insisted he sit in a chair in the center of the spiral with the wheelchair-bound, sleeping babies, and the likes of me, whose arthritic back cannot take that long dance. We were just as much a part of the spiral as the dancers. We looked into each pair of eyes as they danced by. A most intoxicating experience!

Sunday Corby and I were back at Victoria's big table carving jack o'lanterns with Prudence and Pasha and her. We were among the later arrivals; everyone else was gone when we arrived. That's because I was so wiped out from the night before I couldn't get going any earlier.

When we finished, we took the jack o'lanterns out in front of the El Dia de los Muertos altar and sat in a circle in the firelight and sang Samhain songs to our Beloved Dead. Accompanied by Pasha's guitar, we harmonized, in particular, a song that begins:

Dark is the night, still is the Earth
As the veil unfolds.
Turn the shining Wheel of rebirth.
May Earth received thy soul.

For me, that was the most moving and magical moment of this year's celebrations -- so far.

Tonight we are going to use those jack o'lanterns to mark our circle as we dance with the dead under the starlight.

You think that's enough? Nope. Next Saturday we, meaning ICT (Independent Craft Teachers, a guild), will be presenting a Dinner with the Dead at Martin de Porres Hospitality House in San Francisco. We will bring foods our ancestors loved, laid out on tables draped with black lace and topped with sugar skulls freshly-made by Oak. I've never done this particular ritual and I'm looking forward to it.

"What is remembered lives." May your departed loved ones live on on your hearts and minds. Blessed Samhain to all!

*Come back soon for two posts that aren't ready yet, one about death and dying practices and the other about critiquing rituals.

** Stills and videos of this ritual will be made public shortly.

Posted by Broomstick Chronicles at 5:47 PM

Happy New Year, Macha!
Inspired by your description, maybe later tonight I will light up the altar here for my dearly remembered folk.
Hail and remember!
Kate Slater

You have certainly kept busy this Samhain. New year blessing upon you and your beloved dead.
Mandy

and one note: most of us who use chairs consider "wheelchair-bound" to be a limiting if not demeaning term. I know you're aware of the power of language, and I'm sure you had no such intention, so I thought I'd mention it.

Thanks for this memorial.

I actually don't have a picture of JP. I remember him clearly enough! Although I didn't see him face-to-face after he lost his legs. Still, he looks (looked) about the same except for that.