One of the most compelling reasons for me to belong to CoG is the friends I've made through it. I hadn't attended CoG's annual meeting for several years, for reasons I won't go into here, until this year when Laura asked me to present at the Leadership Institute.

Some of the dear friends I was able to visit with this year are: Cat Chapin-Bishop and Peter Bishop, creators of QuakerPagan Reflections blog. Go there to read Cat's remarkable seven-part spiritual journey.

It's always a treat to see Penny and Mike Novack. Penny is fey if anyone ever was. I had last seen her at Dandelion 2 in May of '06. I was pleased that so many other CoG members who'd only known Penny online got to experience the full impact of her.

For the first time I met in person some co-conspirators who helped me write Witchcraft and the Web, in particular Jehana Silverwing, who did the MerryMeet07 website, and Carol Maltby, whose observations over the years, both in the business of writing that book and beyond, I've always found to be wise and compassionate. Plus she has beautiful gray braids. 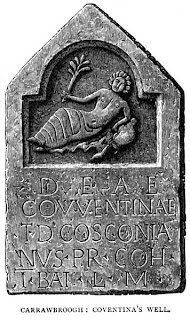 My friend Jennifer Bennett, another CHS teacher, generously shared her dorm room with me. She embodied CoG's matron Coventina at the main ritual. She wore a beautiful shade of blue and carried a cornucopia. At the end of the ritual, participants were given an image of Coventina on a ribbon, handmade by the Witches of Evergreen Coven. I'm not terribly familiar with Coventina. I learned more about her from a slide show by Don Frew and Anna Korn of their trip to Coventina's well a couple of years ago, but I'd not previously known Her to be conceived as a tripartite goddess.

Our EarthSpirit colleagues produced the main ritual. I had a small part paired at opposite sides of the with Eric. Moira choreographed, Deirdre taught us a couple of new chants from MotherTongue's new album, "Weaving the Web," that I guarantee I'll be spreading around.

MotherTongue performed for us after dinner on Saturday night. In addition to chants from their new album, Andras entertained us with a raunchy contemporary version of "Gently Johnny" from The Wicker Man. This is the first time I've seen MotherTongue with their new director, Christopher LaFond.

Other non-members lives in Western Massachusetts and are my witchy pals: Mark Roblee, known in magical circles as Mark Moth. Mark and I go way back from when he lived in San Francisco. He and his wife Jacky (Wacky Jac) live in a Kahlo-esque house in the woods with their two young sons. They don't socialize much. I left MerryMeet one afternoon to have a cappuccino and schmooze with Mark, to the envy of some of his local friends who rarely see him. He's delving into learning Greek, with a goal of learning more about Greek magic. I told him about Tony's work and will recommend Tony's writings.

Most times when I'm in the area, Orion Stormcrow shows up. This time was no different; along he came, all dressed for the masquerade and looking great. I was glad for his company at the ball, glad to do some booty dancing with him.

I only got to wave at Charles Boyce, former Tech Dean of CHS, and his wife Kaitlin in passing. Kaitlin starred in a playlette called "The PerfectTear," by Silkie O-Ishi, about Cuchulain's encounter with Fand of the sidhe in the New York subway and his marital conversations with Emer.

Then there are Pagan friends who are neither members of CoG nor do they live in Western Mass: Michael York and Richard Switzer. Met for the first time in person Thea Collins and our new PIO, Jane Raeburn, both from Maine and both working with CHS. Spent a fair amount of time with CHS Board members Holli Emore from South Carolina and Debbie Fields-Berry from Boston.

I met several folks for the first time whom I know I will carry a fondness for from now on: Ludmilla, Coral, Cosette, Cuchulain, Coyote, and some whose names escape my senior mind at the moment.

Margot Adler gave a great talk about her new edition of DDTM, which opened up into a panel of long-time Witches. I was reluctant to go up to the table, but Cosette and Cuchulain urged me to. We had a fascinating discussion going on, with the likes of Glenn Turner, Penny, Andras Arthen, Anna Korn and others, but, as usual, not nearly enough time. Just like the panel at Starwood the week before. Oh, well, leave 'em wanting more, I say.
Posted by Broomstick Chronicles at 4:58 PM

Wow Macha! You sound like you have an amazing time - very social, with what sound like very interesting people. I'm envious! (I'm very, very bored here in Australia, as well as socially deficient). You must have a very good handle on what's what and whose who in US Pagandom. Do you ever get bored? And, are you going to write a big book about it? Although the blog is a bit like a book, eh?

I used to be in MotherTongue. In fact I did the calligraphy lettering in that design you posted (though the image is always only credited to the person who did the drawing, so I guess everyone assumes she did the lettering too). It was printed on a t-shirt at one time.