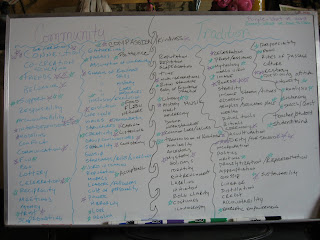 By way of notes, I took this photo of the whiteboard with ideas, words, connections.
Posted by Broomstick Chronicles at 12:34 AM

Ah, I've always thought that I was REALLY born to run a salon.

And I bet you can cook up workshops on at least half of the stuff you jotted notes on!

thanks, Macha, for getting that board up! Hecate...i'd love to be at a salon with you! I guess in some way blogging is an ongoing salon. But it's great also to meet in person and just have a wide open discussion.

This sounds like so much fun, and such worthwhile work! If I lived closer, I would love to attend...

Thanks for posting the pic of the whiteboard, too.

The )APAUSICOTS( have noticed that whiteboards are very limiting, and that one can achieve nearly infinite space (well, as big as the room is anyway) by using flip-chart size post-it notes.