News with a Witchy Flavor

A couple of interesting news stories came to my attention this morning.

Two days ago Starhawk had put out a call for someone to lead a spiral dance at a rally to save some Valley Oaks (quercus lobata) on the UC Berkeley campus, and to support the urban tree-sitters there. I didn't volunteer because I was unsure of the specifics of the protest and how I might feel about it (both the validity of it and the methods) and I had a scheduling conflict. I certainly love the trees. I know they grow slowly and become very large. In addition, I love leading spiral dances, or just dancing them. They're seductive and intoxicating. They make you feel really good. Today this story, with plenty of photos, appeared in the Sunday SF Chronicle. Not surprisingly, the reporter, or the editor, played up the "California woo-woo" angle. This part in particular gave me a chuckle:

They chanted "Om," someone began drumming and then it began: an ancient pagan ritual known as the spiral dance.

Singing their song and forming one long line, they walked around and around in circles within circles, forming a spiral. A man told them it was key to look each other in the eyes during the spiral dance. "It's pretty amazing," he said.

"An ancient pagan ritual known as the spiral dance." I love it!

The second story, in the same edition but also sent by a Pagan friend who was among the 1200 who participated, is about a large-scale plea for impeachment. While not quite as audacious as the Baring Witness shoots I've taken part in, the scale is immense. What a job it must have been to get all those people settled in the right places. And then having to shoot the photo from a helicopter! 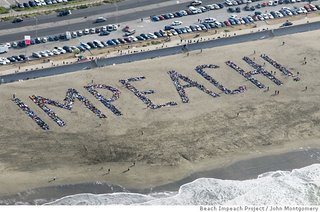 Posted by Broomstick Chronicles at 2:02 AM

Queen on the run said...

Hello, found your blog by searching for those whom share my interests. I found your blog to be quite interesting. Mine is not so much a pagan blog but I do have one in mind. If you want to check it out follow the links. And please let me know if it is okay to add you to my links list.

I love love love the "Impeach" photo. Not only as the photographical feat that it is but also the message.

Additionally I was pleased to read such a positive coverage of the spiral dance ritual.

Thank you for sharing both of these stories. I have linked to the later on my own blog's "Paganism in the News" feature

That's a great photo. I wanted to do a baring Witness event but when I mentioned it at my local Pagan moot (now defunct) there was a deathly hush as if I'd just said something disgusting. I didn't go again.

In Wicca we call it the Meeting Dance rather than the Spiral Dance, but it's the same dance. So that makes it maybe 50 years old - ancient by Californian standards ;-)